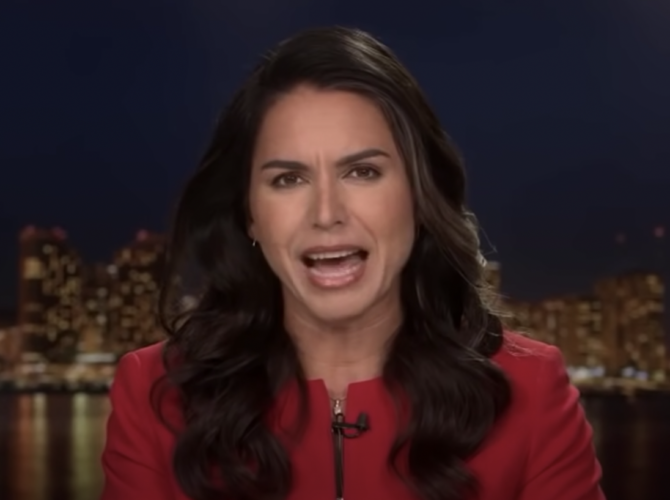 Tulsi Gabbard is trending on Twitter this morning, so you know she said something terrible.

The ex-LGBTQ-ally-turned-Fox-News-commentator tore into President Biden for his speech about voting rights given at Morehouse College, a historically African-American university, on Tuesday.

Gabbard took to Twitter to share a clip of Biden’s address where he called on everyone to “defend the right to vote, our democracy against all enemies foreign and yes, domestic” and asked, “Do you want to be the side the side of Dr. King? Or George Wallace?”

This didn’t sit well with the ex-congresswoman, who felt Biden comparing people who oppose voting rights in the year 2022 to the staunch segregationist/Jim Crow poster child crossed a line.

“Hillary’s calling tens of millions of Americans deplorables was divisive & disgusting,” Gabbard tweeted. “But Biden has gone further, calling those who disagree with his actions & policies domestic enemies, traitors, and racists. Biden promised to unite us, but he is doing all he can do divide us.”

Hillary’s calling tens of millions of Americans deplorables was divisive & disgusting. But Biden has gone further, calling those who disagree with his actions & policies domestic enemies, traitors, and racists. Biden promised to unite us, but he is doing all he can do divide us. pic.twitter.com/1XKS9rfZQT

In her last days before leaving Congress, Gabbard walked back the commitment she made to LGBTQ people during her failed 2020 presidential run by pushing one final piece of legislation that sought to strip protections from trans and gender-nonconforming students.

Since leaving Washington, D.C., she has made numerous appearances on Fox News, attacked openly gay Chicago mayor Lori Lightfoot for being an “anti-white racist”, railed against nonbinary people, and inked a deal with Rumble, the conservative alternative to YouTube, to create content that  inspires debate.

Here’s how people are responding to her latest tweet…

The "List of Tulsi Gabbard endorsements" may be one of the funniest wikipedia articles ever pic.twitter.com/lAATXbMFmu

Any one who can’t discern the extent to which voting rights have been attacked and eroded, in selectively subtle, race neutral, but tangible ways, since the 2008 cycle, simply isn’t being HONEST… your argument was used to defend literacy tests and poll taxes as well!

The last bill Tulsi Gabbard put forward in Congress was to ban trans girls from girls sports. Just like Marjorie Taylor Greene. When Tulsi was in the Hawaii state legislature she proposed anti-LGBTQ legislation that harmed LGBTQ youth.

So trump calling journalists and camera operators “enemy of the people” was a unifying exercise?

Imagine being Russia, wanting to buy a Democrat, and only being able to afford Tulsi Gabbard.

She will never be a thing pic.twitter.com/qPf32DYDBW

Is a bunch of money from @FoxNews really worth selling out *this* hard?

The best thing about Tulsi Gabbard running for president is it stopped her from being in congress.