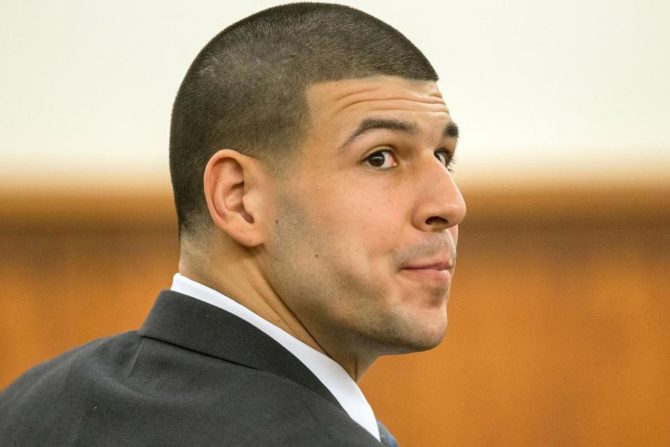 Former NFL player and convicted killer Aaron Hernandez allegedly left behind three handwritten notes before hanging himself in his prison cell this week, the New York Daily News and the Daily Mail report.

One of the letters was purportedly to his fiancee, Shayanna Jenkins-Hernandez. The other was to their 4-year-old daughter, Avielle. And the third was to his jailhouse lover.

The 27-year-old former Patriots star was serving a life sentence for the 2013 murder of semi-pro football player Odin Lloyd. He was found dead in his prison cell on Wendesday morning. The cause of death was ruled a suicide (asphyxia by hanging).

The Daily Mail reports that the notes were placed next to a Bible that was opened up to John 3:16. That verse reads: “For God so loved the world that he gave his one and only son, that whoever believes in him shall not perish but have eternal life.” Hernandez also reportedly wrote the verse across his forehead with a red marker.

Related: Hunger For Touch: The Real Truth Behind Gay Sex In Prison May Shock You

Though Hernandez’s alleged gay lover has not been identified, a “well-placed” source says he is on “eyeball to eyeball” suicide watch.

The Daily Mail also reports that in the days leading up to his suicide, Hernandez gave away most of his personal belongings to other inmates. The last telephone conversation he had was with his fiancee seven hours before he was found dead, but the newspaper insinuates the last person he actually spoke to before taking his own life was his gay lover.

Of course, being the Daily Mail, it’s probably best to take these rumors with a grain of salt. But at least one thing is for certain: The whole situation is an absolute tragedy for everyone involved.