Former Olympic swimmer Klete Keller pleaded guilty to a felony charge connected to the January 6 attack on the U.S. Capitol this week.

Yesterday, the 39-year-old, who won medals at the 2000, 2004, and 2008 Summer Olympics, pleaded guilty to obstructing an official proceeding, which was one of the seven charges against him relation to the insurrection.

According to court documents, Keller spent almost an hour inside the Capitol building, taking photos and videos from the Rotunda before storming into the Ohio Clock Room hallway, where he clashed with Capitol police officers.

During the riot, he wore a dark-colored USA jacket with a red and white Olympic patch on the left front side and reportedly shouted things like “F*ck Nancy Pelosi!” and “F*ck Chuck Schumer!” while he and other domestic terrorists stormed through the hallways looking for the lawmakers.

Now, we know what you’re thinking… Why is this being reported on Queerty??? How is this gay news?! And it’s not. At least, not exactly. But there is an unexpected gay angle, which we’ll now dig into…

The January 6 insurrection is not the first time Keller has made national news for becoming ensnared in a weird and almost unbelievable story.

“There was an open bottle of personal lubricant and a camcorder on the end table, so it’s pretty self-explanatory what was going on,” he told his local news station.

He went on to say that the bed sheets were totally soiled and there were “bodily fluids on the couch”, adding, “The general smell in the house is disgusting. I’ve had all the windows and doors open.” 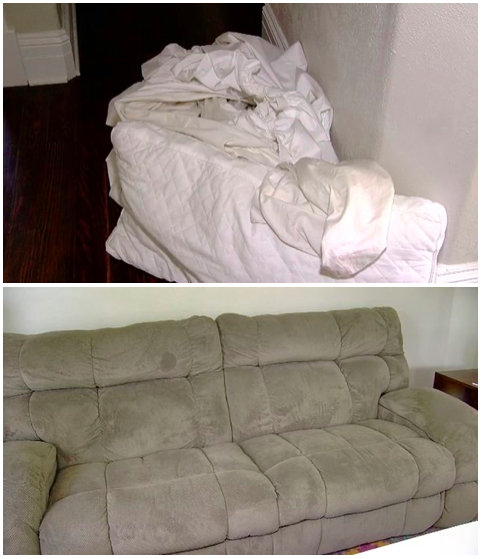 Meanwhile his dog, Jimbo, was locked in a bedroom and, according to Keller, seemed absolutely terrified by whatever had just happened inside the home.

“It was just, just a total mess and I can only imagine what poor Jimbo saw in there,” he said.

The dog sitter later apologized for having guests over and defiling Keller’s house and the company, Wag!, issued a statement saying she was being suspended and it was launching an investigation into the matter.

You can watch that bizarre 2018 news story in the video below.

According to Keller’s plea agreement this week, he destroyed the phone and memory card that he carried with him during the insurrection and threw away the USA jacket he was wearing. He now faces a maximum sentence of 20 years in prison.