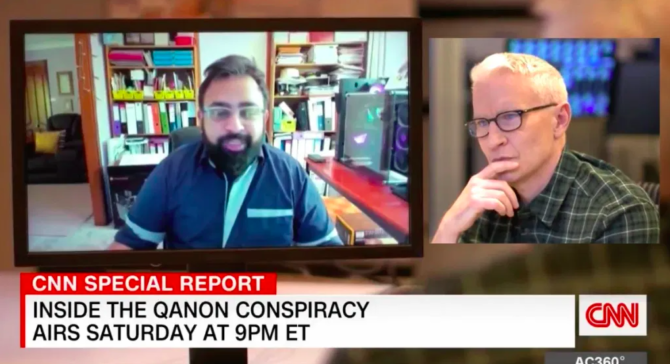 An ex-QAnon cult member sat down with Anderson Cooper on Saturday night to apologize for once believing the CNN anchor was a baby-eating robot, among other things.

Jitarth Jadeja identified with the QAnon movement until 2019, when he started to realize that certain beliefs being shared among members didn’t quite add up.

“Did you believe that high level Democrats and celebrities were worshipping Satan and drinking the blood of children?” Cooper asked.

QAnon started on the far-right fringe website 4chan, where a poster calling themselves Q wrote bogus messages claiming to be a senior federal official with “deep state” intel about liberal plots against Donald Trump.

At some point, the group began circulating false narratives about Cooper.

“Q specifically mentioned you very early on,” Jadeja explained to Cooper. “He mentioned you by name. And from there, he also talked about for example, your family. I’m going to be honest. People still talk about that to this day. There were comments about that [on the message boards] four days ago. People thought you were a robot.”

“You really believed this?” Cooper asked in disbelief.

Answered Jadeja, “I didn’t just believe that. I at one stage believed that QAnon was part of military intelligence, which is what he says. But on top of that that the people behind him are actually a group of fifth dimensional, inter-dimensional, extraterrestrial bipedal bird aliens called Blue Avians.”

“I was so far down this conspiracy black hole that I was essentially picking and choosing whatever narrative I wanted to believe in.”

Former QAnon believer to @andersoncooper: "I apologize for thinking that you ate babies" pic.twitter.com/IcVIwpYykd

on a journey
10 comments