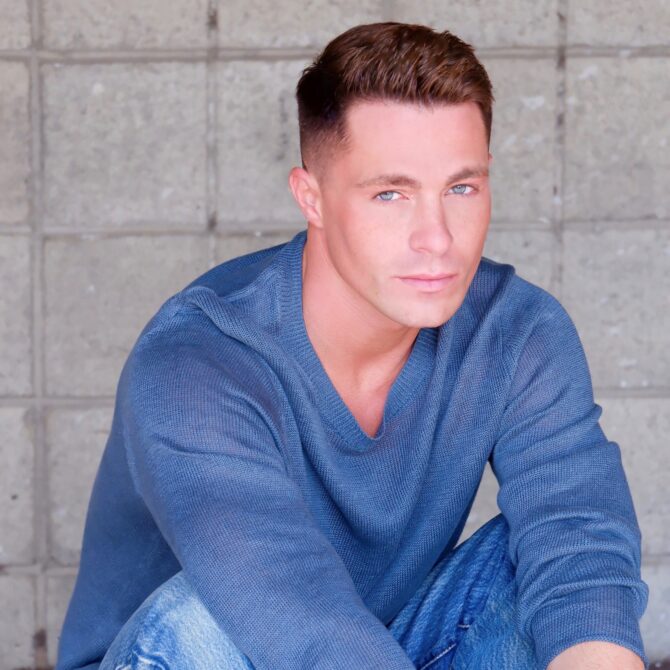 The early chapters of Colton Haynes’s new memoir, Miss Memory Lane, out 5/31, paint a portrait of a wild child bouncing from state to state with his unpredictable, alcoholic mother and, at times, his frequently violent father. Of a boy who learned all too early what his looks and sexuality could get for him—and more importantly what others could take. Of a teenage runaway, a precocious troublemaker, a wannabe model willing to do just about anything to get what he wanted.

But the Colton Haynes who gets on a Zoom call on a recent spring afternoon is a very different person. He’s measured and thoughtful, though still unflinchingly honest about the life that brought him to this moment. Confidently out in high school and his early 20s, he has written openly about the pressure he received from managers and other industry insiders to essentially go back in the closet at the beginning of his acting career. It’s a story most queer people probably won’t find surprising, but it’s one we rarely hear told so honestly, revealing the discrimination many queer performers face in the entertainment business. 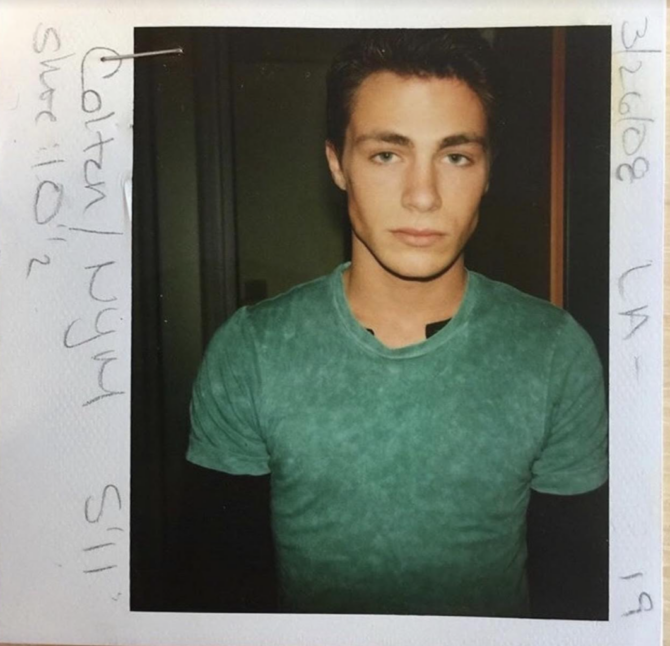 QUEERTY: What made you decide to tell your story now?

HAYNES: I’d been asked a couple years ago to write a book, and I obviously wasn’t in the best headspace at that time. But I had this interaction at a comic convention a couple years back with this young queer kid. He just brought me to tears. It made me realize that I was still ashamed of a lot of the things that had happened so publicly a couple years back. But I realized that maybe my story or being open about my past might help a lot of people. And I lost my sister during the pandemic, and losing my parents, it didn’t worry me that I was 33 coming out with a memoir, because it really brought into perspective that we really never know how much time we have. I wanted to package all of this up in these chapters so I could hopefully start some new ones.

How did you decide how much to reveal, which stories to tell?

I just wanted to make sure that if I was going to do it, that I wasn’t going to be censored. It is a very dark, emotional…I do talk about a lot of sexual experience, and I wanted to make sure not only that it wasn’t a smear piece, because I don’t want to hurt people who’ve hurt me in the past, I just really wanted to authentically speak about my experiences. Basically, I have no other secrets left.

You describe a pretty chaotic childhood. Your family moved around a lot and your parents could be violent and unpredictable. How did that affect you?

In the moment, I didn’t know that other people weren’t experiencing these things. Because as a kid, that was my normal. We were on food stamps and fighting over the EBT card. Growing up in a situation like that and then becoming an adult trying to clean up a lot of those habits was pretty difficult for me. I’m definitely still on that journey.

You reveal in the book that your uncle molested you when you were six years old. How did you understand what had happened to you? When did you realize that this was abuse?

The sexual things that were happening up until I went through puberty…I didn’t understand it until I became a teenager. When I went to write about it, I was talking about it how…I felt like he was the only person I met who was also gay. In my child brain, I didn’t really know that [what he was doing to me] was wrong. You don’t understand that that’s not something that should be happening. Once I realized that that set the tone for a lot of the sexual nature that I would journey through, really up until I became an adult, I realized that it was wrong. I’m still trying to kind of figure out now—being attracted to danger or wanting the people who don’t necessarily want me. I’ve taken a step back from a lot of those relationships and I’m trying to work on myself so I don’t hurt anyone. Trying to fix all that still, currently. 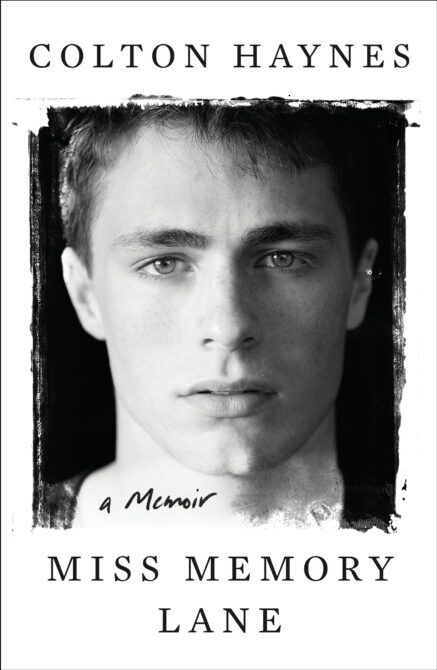 You describe a pretty harrowing experience of being asked to simulate sex in one of your first acting classes when you got to L.A. in 2007. Do you know if that kind of thing was typical? Is it now?

It worries me that it’s still going on. I almost don’t feel like that was the only class that that was going on. I would pray that it’s not going on in this day and age, let alone back then. Because the damage that it really has cause me… I’m still in contact with people who were also there with me. To be so young with this group of actors—there’s a handful of actual stars, people who have been nominated for Oscars, that were in that class. Every time I run into them, they say, “We survived that.” That happened to me pretty recently. It struck me: I thought I was the only person who was being affected by it because I was being targeted because I was the only one, at least that I knew of, who was gay. That experience, what it ultimately ended up doing is it made me a people pleaser, and it made me realize that I’d do anything that I could. I’ll be anyone that you want me to be. And I think that was hard for me, because I miss that person I was before I moved to Los Angeles. Sometimes I find myself hating the character that I’ve created.

You were told by your manager and others that your mannerisms were “too gay.” What do you think he was responding to?

It felt like there was something new every day. Which kept breaking my heart, but also pissing me off, because all I could think was, “Did my photo get me in the door? Was that all I was good for? My physical appearance?” It made me believe that everything that I was was not good enough. After being told that I needed to fix all of these things—as if everything that I was was broken—I began just having to go to all these movement classes and this speech therapist and learn how to stop blinking so hard like I was batting my eyelashes at people. Correcting the way that I walked. It became an attack on everything that I was.

It caught to me years later, because I didn’t realize that I was projecting an image. What I was doing, and why I was getting a lot of hate—I was basically saying to the gay people who were watching my stuff and who knew about me was, “You can be gay in the industry as long as you don’t say you are, and as long as you’re like me.” So, as long as you “fix” certain affects. Once I realized that I was projecting that message, it just broke my heart. That’s been something that’s still really hard for me. At the same time, it wasn’t all my fault, because I was being told that if I wanted to pursue my dreams, I couldn’t be anything like what I was. 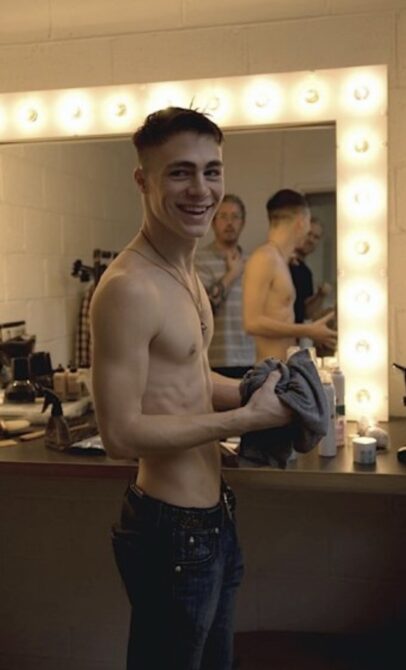 It’s interesting to think about this: When an actor is told he seems “too gay,” he’s being told that there won’t be roles for him, which in a sense means there aren’t enough gay roles in films and on TV and also that Hollywood, America, etc. doesn’t want to see real gay people in the few roles there are. How does that make you feel about the industry?

[Laughs] Not hopeful. It doesn’t make me feel good about it at all. To be someone who learned all these things so I basically could fit my career around my jawline and my haircut and my cheekbones, to then learn how to play these straight roles, and then to come out of the closet and literally the only roles I get auditions for—let’s say 98 percent of the roles I get auditions for, which are few and far between—they are almost 100 percent gay best friend. The new one is gay dad. Basically since 2016, every role I get auditions for is gay. I’d never played a gay role until I came out, until Teen Wolf made [my character] gay because I came out. So, basically, having all these opportunities be formed around my personal life has been a really frustrating thing for me.

Do you have a sense of whether this is still going on? Are young performers still being pressured to go back into the closet?

I don’t personally know anyone who is struggling with it. But I know of people. What really breaks my heart is the longing for people to come out, but it’s the attacks that come after. Attacks that happened to me leading up to it, people saying the worst things about me on social media. And then after [I came out], it kind of continuing from within the community. That breaks my heart, because…to speculate about people and then just abandon them after, that sucks. It’s not a very good feeling, going through it. Recognizing when someone is really struggling with something and when someone’s open and honest about their struggles, I just want people to accept people more and to understand that they’re doing what they can to try to pursue their careers. I just really want acceptance, obviously from outside the community, and also from within the community. That’s the most important thing that I hope for.

Is the entertainment business homophobic? And I mean in the sense that, it’s full of people who are maybe personally pro-gay, or even LGBTQ themselves—but there’s still structural homophobia underlying decisions about what gets made and who gets work.

I think it all stems from: the industry is going to make whatever the audience is going to buy. The audience is homophobic. And therefore, if you think about it, the studio heads and whoever, they care about their way of thinking, which is very archaic. I think a lot of them think that gay doesn’t equal dollars. So many people are kicking through that door. Obviously, we’re proving people wrong. But I think there’s still a great deal of homophobia in the industry. I think just having one gay person play number six on a call sheet on your television show, I don’t think that that’s really showing that you’re not homophobic. I think it’s more important to have real queer stories as opposed to just packaging them in a way that is safe for audiences.

bring the beat in
26 comments

call me by my name