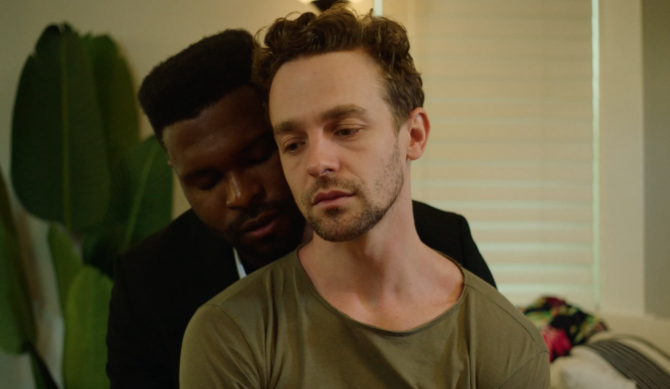 “For me, it’s the best combination between drip and espresso because you can decide how rich you want it to be,” he recently told Queerty. But there’s much more to it than that.

“More importantly,” he continued, “there’s something ritualistic about it that I enjoy when I’m starting my day, so that was why I specifically wanted to have a pour over setup for the story.”

The story he’s referring to is “A Coffee Grinder,” his latest short film produced by Queerty that explores a gay relationship that’s fallen out of sync. Sean, played by John Brodsky, struggles to get his life on track while contending with depression, while his partner Oliver, played by Lassiter, yearns for more out of the relationship. When Oliver comes home with a new coffee grinder, a conflict ensues that quickly encompasses more than a cup of joe.

“A lot of it is about understanding mental health, and that’s something that’s never really talked about — it doesn’t get the attention that it needs,” Lassiter explained. “If you don’t understand someone who’s going through anxiety and depression, then you’re not going to know how to communicate with them and support them.”

Lassiter said he wanted to tell a story about the queer experience that isn’t often explored — what happens after the coming outs and the fairy tale romances.

“There’s so much more to the queer experience than coming out,” he said of his inspiration for the film, which is based on his own experience. “There’s also existing, living, learning to love.”

“I felt it was very important to tell a story, especially for the gay community, about values, goals, ambitions, and communication,” he continued. “Communication is such an important piece to any relationship. You can have love for someone, but there are so many other elements that are involved. How do you express that love? Can you see things from the other person’s perspective? Where can you find compromise? What are your shared values, and where do your values diverge?”

Lassiter hopes viewers will ponder some of these questions after watching “A Coffee Grinder,” and we’re thrilled to premiere it below:

As for what’s next for Lassiter, we’ll be keeping an eye out for two exciting projects.

“One is a rom-com that’s kind of a queer version of Roman Holiday meets Coming to America, and the other is going to be a survival thriller very much in the vein of Resident Evil. I’m very excited for that and currently working on the script for it.”