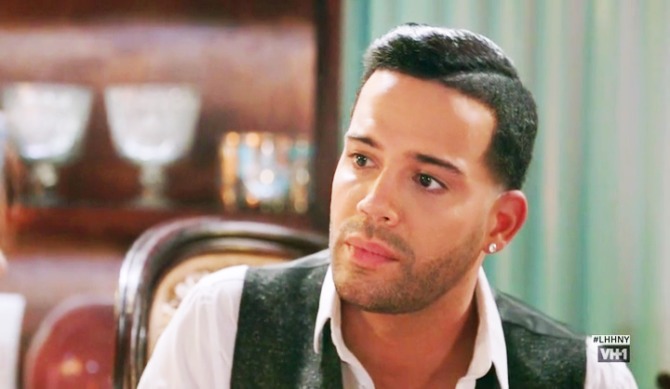 At first glance, Jonathan Fernandez may appear like any other handsome reality star, but take a closer look into his past, and you’ll learn he is anything but. That’s because at the age of 10, the Love & Hip-Hop New York star’s mother sent him to the Dominican Republic to undergo the controversial, yet legal, conversion therapy.

Bullied all throughout his childhood for not fitting into the “normal” gender stereotypes, his mother believed the treatment would help him address his feminine qualities, and ultimately keep him safe from his abusers. For six months, Fernandez was subjected to painful electroshock therapy, intensive questioning, and testosterone injections that left him unable to walk.

“It reached the point where I couldn’t bend my legs,” Fernandez tells Queerty. “I’d scream and cry, bloody murder. It was the worst pain. My family would have to carry me up the stairs when we got home because I couldn’t walk.”

Despite the distress of what we he went through, Fernandez found courage to speak about his horrifying past during a recent episode of Love & Hip-Hop. In the episode, Jonathan sits down with his mother and sister to discuss the horrors of what he endured as a child, a pivotal moment in the show’s eighth season.

Queerty recently connected with Jonathan to discuss his time inside that conversion therapy clinic, what having that conversation with his family on national television was like, and if he still struggles with the ramifications of what he endured…

How was it filming that episode for you, and everything leading up to it?

For me, it was a no brainer, but it was difficult because my family [was involved] and I just didn’t want to do anything that was going to cause a rift with my family. I spoke to my mom, and gave her a heads up that I wanted to talk to her about my time in the Dominican Republic [and] she said, “If this is something that you have to do in order for our relationship to be 100%, then let’s do it.”

What has the response been like since the episode aired in January?

People have been super supportive, even celebrity clients of mine who didn’t know that [conversion therapy] was ever a thing have reached out, saying, “Oh my god, this is crazy! We can’t believe you went through this!” Every now and then, people will comment and say something like, “This is something you did for publicity,” or “You made this up.” To those people, all I can say is, kiss my ass, because who in the hell would bring their mother on national TV to talk about such a traumatic thing? Even for my mother, this hasn’t been easy for her. People will go up to her and say, “How could you do that to your son?” But for my mom, [having that conversation on TV] was a price she was willing to pay in order to heal the relationship between her and I.

What has your relationship been like with your mom and your family since that conversation?

Honestly, it has been great. There are people who have not been as receptive, because they feel not everything should be made public fodder; people are upset that this is something that I brought up on Love & Hip-Hop. But for me, I felt like, just because I went through something traumatic, doesn’t mean I can’t use my experience to help somebody else heal. It wasn’t like I ambushed my mother and just brought her on the show and said, “This is what you did.” I told her [in advance]… it was a conversation we needed to have. I just didn’t want to live my life having resentment toward my mother. But she didn’t know [what was really happening]. She told me, “I thought I was sending you somewhere where they can help you become more masculine so that kids will stop bullying you.” She was a young, single mother with a flamboyant gay son, who had a loud mouth and a big personality. She didn’t know what to do.

I remember in the episode, she said that, for her, she thought she was making the right decision at that time.

Right. At the end of the day, I know had they been more clear with her in terms of what the treatment consisted of–had my mom known at the time that I was being electrocuted every single day–she never would have agreed to that. [Sometimes] she’ll ask, “Well what kind of electricity was it?” and I’m just like, “Mom, I don’t know, they would put these things on my body with chords on it and they would press a button and I would get zapped.” She just can’t believe that I went through that.

Would you say you are still dealing with the ramifications of having undergone conversion therapy?

I think it’s all in my subconscious. People ask me why I am such an explosively reactive person, and I think it comes from being put in a corner for eight months when I was a kid. I remember near the end [of that eight months], I made a silent vow with myself that I was never going to let anybody put me in a corner like that ever again. So the minute a person does the smallest thing to me, I explode.

In those moments, are you able to catch yourself?

No, because it makes it worse that i am a hot-headed Latino [laughs]! I got three X’s on me, honey. I’m going to get to you because I’m Spanish, because I’m gay, or because I went through so much sh*t as a child. It is the perfect concoction for the hot mess that I am.

[Laughs] I love it! It is good that you know that about yourself! I know Washington state recently became the latest state to ban conversion therapy for minors. What are your thoughts on this and do you think that the tide is starting to turn when it comes to conversion therapy?

I think it is, but we have a long way to go. I think religion has a lot to do with it. So many people that subject their children to this are people [from devout religious backgrounds]. Until religious leaders speak up, and say, “Children are too young for us to make science fair projects out of them,” we’re not going to make huge strides.

I just wish people that backed conversion therapy or supported it really research exactly what it is because, if people knew for one second [what really happens], if only for one day, they would never put their children through this. Never, because it is literal torment.

What advice would you give to other people who have gone through similar experiences as you?

I’ve read so many cases of people who commit suicide because they just can’t deal with the mental torment of [something like conversion therapy]. My advice for anyone who has gone through it is to not give up. Seek help, talk to people, you’re not alone. Sometimes when you go through something like this, it is so isolating that you don’t think anybody is going to understand. But I say, talk about it as much as you need to in order to heal, but don’t let it define you. It is something that happened to you, but it is not you.

That is quite profound, and great advice. In terms of the future, are you hopeful? Optimistic? What is your current outlook like now?

Absolutely, I think everything happens for a reason. Many people can dog on Love & Hip-Hop, but I can personally say that thousands of people have reached out and shared their experiences with me. I have swayed the opinion of many people, and even changed some of the relationships with some young gay boys with their moms for the better. I’m completely optimistic about the future because, while I went through hell, perhaps I prevented a few young boys from going through the same hell that I did. For that, I am grateful.