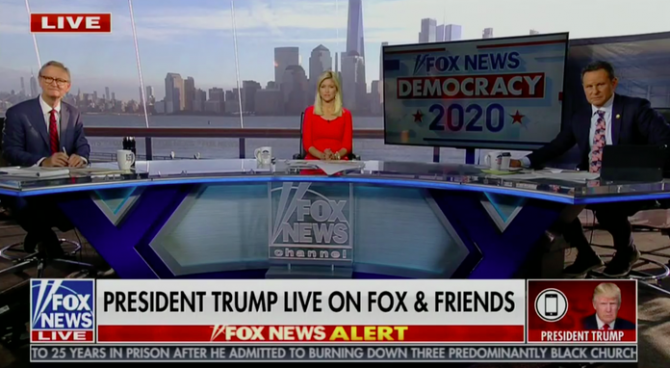 As polls opened across the country this morning, Joe Biden went to church with his family then visited the gravesites of his son, Beau, his first wife, and his daughter. Meanwhile, Donald Trump called into Fox & Friends to babble for 30 minutes about whatever nonsense popped into his head.

He spent much of the time bragging about the crowd sizes at his rallies, complaining about how “mean” people have been to him, and trashing Joe Biden. Then, oddly, he turned his ire towards Fox News itself.

“Fox has changed a lot,” Trump bemoaned. “Somebody said ‘What’s the biggest difference between this and four years ago?’ I said Fox, it’s much different, you know… Fox is a much different place in terms of politics.”

He continued, “In the old days, [Fox] wouldn’t put on sleepy Joe Biden every time he had opened his mouth. They had other networks for that, frankly. It’s a much different operation, I’m just telling you. It’s much different.”

Trump went on to compliment Fox News anchors Sean Hannity, Laura Ingraham, and Tucker Carlson, but whined that the network is “much different” than it used to be.

Trump's closing message on Fox & Friends is a discussion of Fox?

"Somebody said 'what's the biggest difference between this and four years ago,' and I say, 'Fox.' It's much different."

Three Fox & Friends hosts jump in to defend the network. This went on for a few minutes. pic.twitter.com/EbXEknNZKz

Throughout the interview, Trump sounded tired and spoke as if it were already a foregone conclusion that Joe Biden was going to win the election. At one point, he said, “Joe’s going to have a hard time,” adding he was “not going to be able to handle” governing.

Trump called in to Fox and Friends for his final whine before he is voted out.
No one gives a shit what he has to say anymore.
It’s over.

On Fox & Friends, Trump said his time in office has been ‘mean’ and lonely.

If he thinks that’s bad, imagine how he’s gonna feel about prison.

Biden just left church, where he visited the grave of his son Beau.

What does this say to you about the candidates?

Was Trump practicing his concession speech on Fox and Friends this morning? #Election2020 https://t.co/dJ5epp6muN

Trump bashing his buddies on Fox News this morning shows his lack of character. He’s a sore loser. He hasn’t even lost yet and he is already kicking dirt and being abusive toward his friends. That’s the kind of person he is. I will be so glad to be rid of him and his abusiveness.

Trump sounded exhausted and defeated throughout that Fox & Friends interview. All parties involved understood it might be the end of the line.

Listening to parts of the Fox and Friends Trump interview, it sounds like reality is setting in for him.

Trump’s sounds like he’s already lost to Biden on Fox.

“Joe is going to have a hard time, he’s not going to be able to handle that”

Trump adderall wearing off on “Fox and Friends” pic.twitter.com/bxiWabPhwO