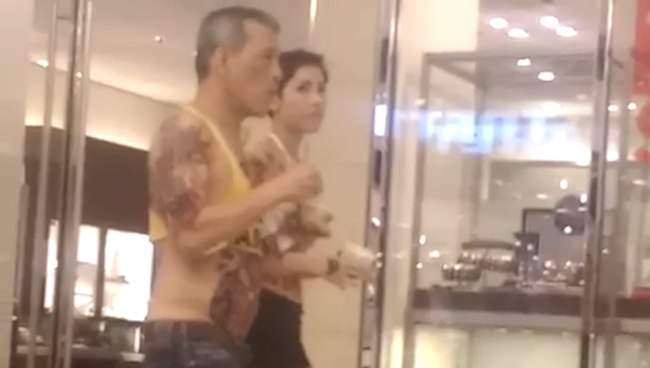 Facebook users in Thailand are currently blocked from seeing a video featuring the country’s king floating through a German mall wearing a crop top and hanging with one of his mistresses.

Vice reports the video was banned because Thailand’s government finds it insulting to the king.

Facebook is facing sharp criticism for its censorship policy, which defers to requests by authoritarian regimes to censor content. Last year, those policies were put under scrutiny after the social network censored a Vietnam-era photograph of the naked 9-year-old “napalm girl.”

Facebook admitted to Vice it was blocking anyone in Thailand from seeing the vid of 64-year-old King Maha Vajiralongkorn Bodindradebayavarangkun, captured several months before his father passed away and he ascended to the throne.

Facebook is geoblocking this video of Thailand's King Vajiralongkorn so users in Thailand can't see it pic.twitter.com/QAE2SNr2KY

A Thai citizen filmed the video at the Riem Arcaden mall in Munich on June 10, 2016.

According to Vice, King Vajiralongkorn (which means “adorned with jewels or thunderbolts”) took to the throne in December

following the death of his father, the much-loved King Bhumibol Adulyadej. Although details of his extravagant and controversial lifestyle were widely reported outside of Thailand when he was crown prince, his subjects for the most part remain oblivious, thanks in no small to the country’s strict lèse-majesté laws, which effectively prevent citizens from openly discussing any details of the new king’s life.

“So a video like this chucks a bomb into all of that,” Marshall tells Vice.

“While people may not necessarily be surprised, I think it would have a significant impact if it was widely seen, it would help puncture the bubble of the monarchy.”

According to a Facebook spokesperson, when they receive censorship requests “it is scrutinized to determine if the specified content does indeed violate local laws.”

“If we determine that it does, then we make it unavailable in the relevant country or territory and notify people who try to access it why it is restricted.”

Gennie Gebharta, a researcher for the Electronic Frontier Foundation (EFF), says Facebook is in a rather tricky position:

“This and other ongoing Thai government attempts to censor social media point to both the government’s increasing willingness to censor content critical of the monarchy as well as all the hurdles it faces in doing so in an HTTPS-encrypted, social media environment.”

After Marshall posted the video to Facebook last month, the Thai government banned citizens from contacting him (as well as two more critics of the regime) via social media.

One of those people was activist Somsak Jeamteerasakul, who was told by Facebook representatives what content was going to be blocked, and why. 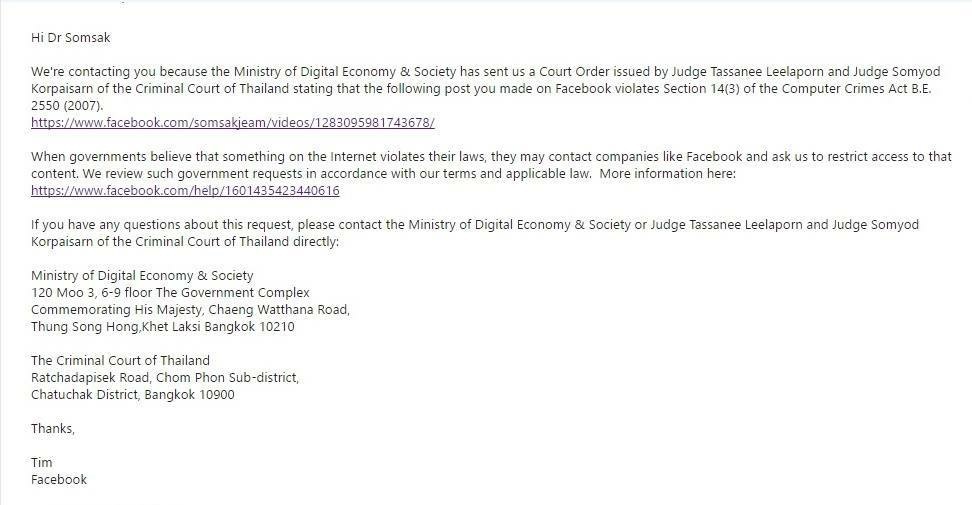 Marshall says he is somewhat sympathetic to Facebook’s predicament:

“They are caught in the middle, because Thailand has these ridiculous laws, where anything you say that is deemed critical of the monarchy can get you jail sentences of hundreds of years.”