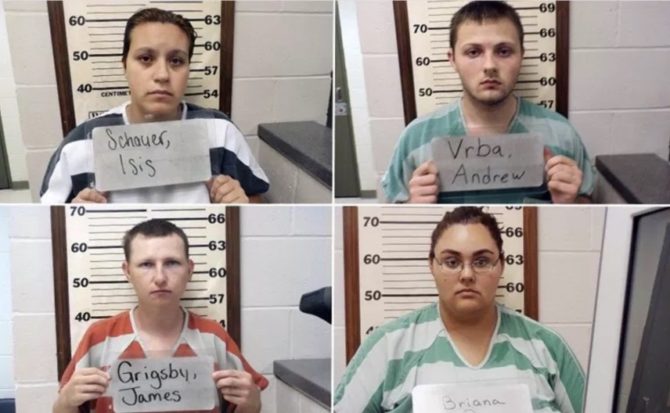 The four people pictured above have been arrested in Texas County, Missouri on charges of brutally beating transgender teenager Ally Steinfeld to death.

On Monday, 19-year-olds Andrew Vrba and Isis Schauer and 24-year-old Briana Calderas were arraigned for first-degree murder, armed criminal action and abandonment of a corpse.

James T. Grigsby was also arraigned on the charges of abandonment of a corpse and tampering with evidence in a felony case.

The Springfield News-Leader reports that Schauer and Calderas informed police they’d assisted in burning Steinfield’s corpse after he’d suffered repeated stab wounds and had his eyes gouged out.

The remains were discovered near Calderas’ mobile home in Cabool. Ally had been reported missing by family.

The last three people known to have been with Steinfeld were Vrba, Schauer and Calderas. The Steinfeld family had spoken to all three suspects and believed them to be lying about where Steinfeld was.

During police questioning, Schauer said he had no part in Steinfeld’s disappearance. However, it’s alleged that Facebook messages turned up on Schauer’s phone telling her to “stick to the story” and “quit talking.”

Vrba, who later confessed to the murder, is believed to have sent those messages to Schauer. Vrba also said he first tried to poison Steinfeld before stabbing him in Calderas’ home.

Schauer later revealed she was, in fact, aware of the murder and helped dispose of the body.

Steinfeld’s sister Ashleigh Boswell described Steinfeld as “a very loving, outgoing person” who “didn’t like conflict whatsoever” and had talked to the family about undergoing gender reassignment surgery one day.

“We honestly don’t understand why they done it,” she added. “It just don’t make any sense.”

A GoFundMe campaign has been set up to help pay for Steinfeld’s funeral expenses.