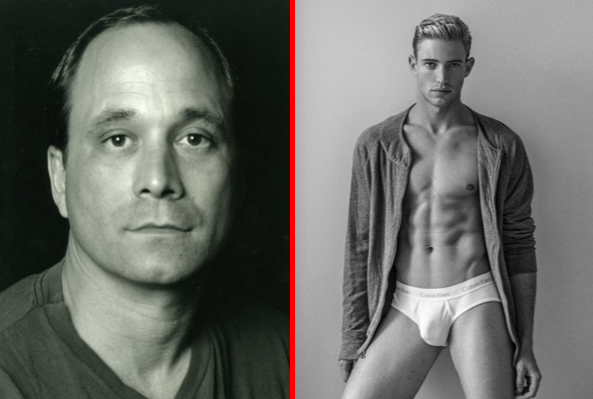 Ross Bleckner is an American artist and philanthropist from New York. His work has displayed in some of the world’s finest museums, including the Guggenheim, the Whitney, San Francisco Museum of Modern Art, the Hayward Gallery in London, and the Moderna Museet in Stockholm, among many others.

He’s currently engaged in a bitter legal battle with his ex-lover, a 25-year-old construction worker/aspiring model named Cody Gilman, who he says is trying to extort him for millions of dollars.

It all started back in May, when Gilman sent Bleckner a draft lawsuit saying he intended to sue his 69-year-old ex for years of sexual harassment and assault, which he says caused him “severe emotional distress and physical ailments.”

Gilman’s attorney contacted Bleckner with a draft lawsuit that claimed the aging painter had “sexually harassed, coerced and assaulted” his client, according to court papers. Gilman demanded in excess of $2 million” otherwise he “would publicly accuse [Bleckner] of sexual harassment, coercion and assault by filing the draft complaint,” the suit says.

According to Gilman’s lawsuit, they first connected online in 2013 and had continued “social interactions over the course of four years.”

At some point during their relationship, Bleckner hired Gilman to be his personal assistant. He was paid $750 a week and housed at Bleckner’s home in the Hamptons, in a house once owned by Truman Capote. His responsibilities included everything from “cooking meals” to “providing massages”.

Gilman claims he told Bleckner he “wanted their relationship to be strictly professional” but gave in to his advances for fear of losing his job.

But Blecker tells a different story.

In a counter lawsuit filed against Gilman, he claims they met online in 2015 and “engaged in consensual sex on several occasions” that year and that’s it.

[Bleckner] notes that he’s a “five and half foot tall 69-year-old artist” while his ex-lover is “a more than six foot tall 25-year-old construction worker.” Bleckner is suing for unspecified damages. “By filing this lawsuit, Ross Bleckner is saying that he refuses to be intimidated, refuses to be a victim, and is not afraid of the truth,” his attorney Seth Rosenberg told The Post.’

Gilman replied by claiming to have recordings of interactions with Bleckner that prove his case, to which Bleckner’s attorney responded by suggesting that, if those recordings exist, they were made illegally and are inadmissible in court.

[Bleckner’s attorney Seth] Rosenberg said he had requested to hear the tape recordings but Mr. Gilman’s lawyer had refused to share them. “We don’t know whether there was staging but we do know the only person who knew about the conversations when they were being recorded is Mr. Gilman,” Mr. Rosenberg said.

Sounds like this one’s gonna get messy… or should we say messier.