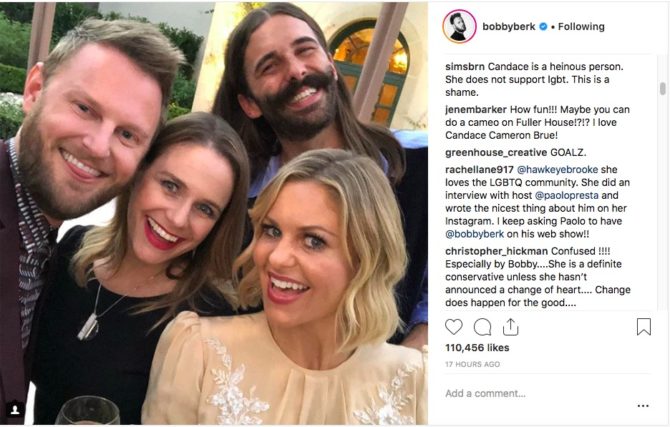 But while the celebs themselves dreamt up a crossover idea, LGBT fans and their allies were calling foul.

“I thought Candace Cameron Bure was a homophobe,” one person wrote in a comment on Berk’s Instagram upload.

The actress has denied she’s homophobic, but these Instagram commenters likely remember the 2015 episode of The View in which she defended an Oregon bakery that refused to bake a cake for a lesbian wedding.

For his part, Berk addressed the selfie criticism through his Instagram Stories. Per PinkNews, the interior design guru said:

“She’s a human and an artist just as I am, and the whole basis of Queer Eye is to learn to be able to coexist and to learn from people who think differently from you. I do know her views. I am against her views, but as a person, I love her just as we should all love each other.”

But Berk’s conciliatory attitude will likely do little to placate critics, including the Instagram commenter who referenced the infamous 2012 interview in which actor Kirk Cameron, Cameron Bure’s brother, called homosexuality “unnatural” and “destructive” to society.

“Yes @candacecbure, please come out in defense of LGBT people and condemn your brother’s [hateful] and harmful words,” that commenter wrote. “There is a long history of damage between [your] family and LGBT people.”