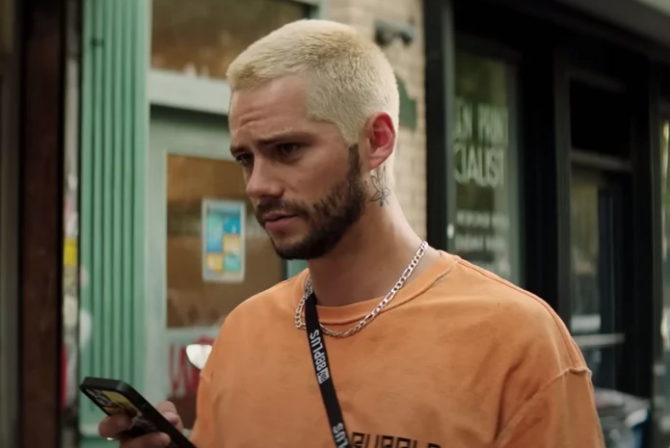 Teen Wolf star Dylan O’Brien clearly has plenty of gay fans out there who weren’t upset when they learned his new film would include a steamy sex scene.

Until they watched it, that is.

In Hulu’s Not Okay, O’Brien plays an incredibly unlikable influencer named Colin who has a relationship with Danni (Zoey Deutch), a woman seeking internet fame at any cost.

During the scene in question, Colin and Danni hook up in the bathroom at a party. Things quickly go from steamy to all-out cringey as Colin engages in some red-flag-level dirty talk.

Related: Dylan O’Brien has Twitter in heat and he’s all for it

“You’re so tight,” he says. “Who’s my damaged little girl? Are you damaged? Don’t worry, I will protect you. I ain’t gon’ let anything bad happen to you now. You’re so fucking helpless.”

Viewers have been losing it over the scene. Some are thoroughly grossed out, others turned on, and then there are the people who are confused at being grossed out and turned on.

It’s all led to some rather spirited discussion.

damnnnnn I lived to see this kind of performance by dylan o'brien ?? pic.twitter.com/T21DhUMxoA

in sorry but if a guy said this to me i would start laughing at him and ruin the whole vibe idk how u guys find this hot pic.twitter.com/O7SfI1fELY

i can tell the truth on this acc: today i watched the 'not okay' movie and I'M ASHAMED to admit that when the character of dylan o’brien said “who’s my damage little girl huh?” in the middle of a sex scene a spat my water and something ignited inside of me pic.twitter.com/lbea3ZwGk4

I apologize for not being available today, I am too busy repeatedly rewatching Dylan O'Brien's 30 second sex scene until I can't breathe

if you find the dylan o'brien sex scene hot… 1. you missed the entire fucking point of the movie and I have bad news for you about your critical thinking skills, and 2. I do not trust you because why was that hot to you ? were you not listening to what the character was saying

Listen. I know the sex scene in Not Okay is supposed to be cringey but you give me fuckboy Dylan O'Brien with blonde hair and what he is saying and I'm not okay, okay?????

For his part, O’Brien told Entertainment Tonight that shooting the scene was the only time he “ever felt uncomfortable during filming.”

Not Okay is currently available to stream on Hulu, or here’s some Dylan content that’s less likely to make you cringe: