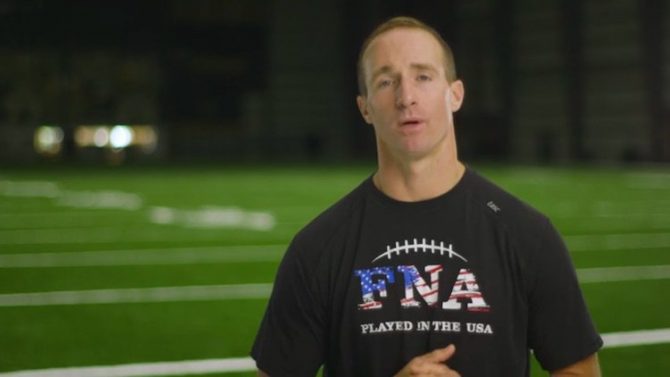 New Orleans Saints quarterback Drew Brees has been laying low since being exposed as a bigot earlier this week. Meanwhile, his fans are in a collective panic.

It all started when Brees appeared in a video for the antigay hate group Focus on the Family to promote “Bring Your Bible to School Day.”

“I want to encourage you to live out your faith on Bring Your Bible To School Day and share God’s love with friends,” he says in the video, which began making the rounds on social media last weekend.

Join Drew Brees as he encourages students to “live your faith and share God’s love” on #BringYourBible to School Day, Oct. 3. Click below to learn how your voice can be counted.

Shortly after that, it was revealed Brees has working with the organization since 2010 and was even profiled on the hate group’s official blog in 2015.

Adding a layer of awkwardness to the whole situation, Brees is a longtime friend of Ellen Degeneres and once filmed an anti-bullying PSA for her in 2010. He also appeared in an It Gets Better video.

The responses from football fans have been all over the place.

Many people are outraged by the whole thing…

Several outlets reach out to @drewbrees to ask why he would do a PSA for a known racist discriminatory religious cult. He hasn’t replied. Mainstream media ignored it, but had lot to say about Chappelle jokes, but I digress https://t.co/gywLbmicRb

Turns out, @drewbrees has his own profile on their website and has even done a previous interview with them.

Drew Brees, why are you supporting and have been supporting anti-LGBT organizations? pic.twitter.com/SCOq42d5dQ

Drew Brees actually sells a supplement for AdvoCare that can make you ungay.

Drew Brees partners with wildly homophobic and anti-choice organization. Im sure the “stick to sports” crowd just missed it though. pic.twitter.com/U19NdfzF3V

Others seem to be in denial about it…

I really hope Drew Brees wasn’t knowingly promoting an anti-LGBT group. He is a hero to so many and I never would have thought he was a bigoted man #SaintsDontHate #IsitTrueDrew

The Drew Brees commercial makes me so sad. Not sure how to deal with this.

Unpopular opinion. Athletes aren’t under obligation to be hyper socially aware. Drew Brees likely knows nothing about Focus on the Family other than they’re a Christian group. all he endorsed the video encouraging kids to carry bibles. This is on his publicist.Don’t come for Drew

@drewbrees Please tell me you don’t support an anti-USA company that doesn’t believe in equal rights for all Americans? 🙁 https://t.co/52PbOoq5aD

I want to pretend I don’t know this while simultaneously never forgetting it. Unfortunately it’s not the first red flag that he isn’t as wholesome and great as most would like to believe. Great QB? Yes. Great guy? Not so sure.

I never cared much for Drew Brees until now. This shows he is willing to take a stand for what he believes. It makes no difference what man calls him. God’s view of him is the only lasting thing that matters. Thumbs up to Drew Brees.

The Drew Brees news makes me like him even more

So they want to cancel Drew Brees because he recorded a video produced by Focus on the Family? Are these petty simple people serious?

I Am Atheist AF – & I support #DrewBrees ? % #StandForWhatYouBelieve you people are so Hate Filled yourselves it’s unreal, oh if it’s all pro-gay it’s OKAY -But people who decide to live the tradition Christian Life – People bash them, WHY? Oh yes because It’s Not Your Way eh ??

Remember @drewbrees the voices shouting at you are a small, loud and disproportionately influential minority.

You are supported by millions of people who genuinely appreciate your strength, faith and courage.

Neither Brees nor the New Orleans Saints have issued any comment in response to the controversy.

Meanwhile, in other news, Colin Kaepernick is still blacklisted from the NFL.