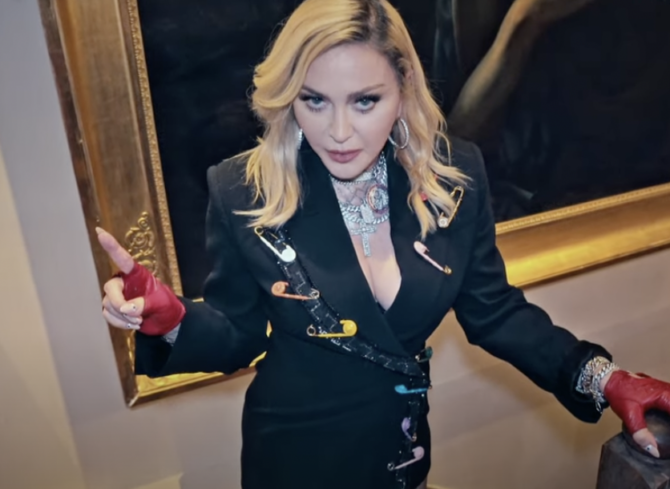 Madonna stans have been having a collective meltdown the past few days after rumors began swirling over the weekend that her self-written/directed/produced biopic was on the verge of being shelved.

It all started when a Twitter account that peddles in celebrity gossip posted a screenshot of an alleged DM from someone claiming to be a Madonna insider who said the hotly-anticipated biopic “might actually not happen.”

According to the unnamed source, the project is a “nightmare”, the script needs “constant changes”, and the whole thing is “costing a ton of money.”

According to a new post from @deuxmoiworld, the biopic May no longer be happening anymore pic.twitter.com/j1chExjp7W

While all of those claims sound plausible, they are also extremely vague, impossible to verify, and not unlike 90% of films when they’re in development. They don’t call it “development hell” for nothing, after all.

The claims also don’t align with what Madonna herself just said about the project to Variety earlier this month during a Q&A to promote her new remix album Finally Enough Love, which debuted at #8 on the Billboard 200.

“I have a very long script that is really hard for me to make shorter,” she said. “I’ve been whittling away at it, but it’s like hacking off my limbs.”

Related: WATCH: Madonna’s “bad influence” is all over the new trailer for the Weird Al biopic

When asked why she decided to write and direct her own biopic, the singer replied, “I’ve had an extraordinary life, I must make an extraordinary film. It was also a preemptive strike because a lot of people were trying to make movies about me. Mostly misogynistic men. So I put my foot in the door and said, ‘No one’s going to tell my story, but me.’”

That said, when the movie was first announced last year, Madonna revealed screenwriter Diablo Cody was helping with the script. After Cody left the project, Erin Cressida Wilson signed on as co-writer. It’s unclear whether Wilson is still attached to the project.

On top of that, two-time Emmy nominee Julia Garner was reportedly tapped to play the Material Girl back in June, but no actual deal has been publicly reported and Garner hasn’t said anything publicly about being cast.

Related: Lori Petty’s crazy response to having to share a trailer with Madonna during ‘A League of Their Own’

For now, however, the official report is that Universal Pictures still plans to produce the film, which will chronicle the early days of Madonna’s life and career.

Despite the fact that that project still appears to be moving forward, diehard fans are freaking out about rumors it’s on life support. Check out what they’re saying…

Omg being her fan is so stressful 💆🏻‍♀️

me reading the madonna biopic might not happen but then reading a cher movie is apparently on the way: https://t.co/79nigrnIA4 pic.twitter.com/qnW8zZ2hZz

I’d be sad if the Madonna movie was canned as I’m very much here for the project, but it wouldn’t surprise me at all. At the least, I expect it to be delayed by some years.

just make a movie about the madonna biopic bootcamp instead… 10/10 would watch it pic.twitter.com/YMALmGx4cu

I’m in stitches! Screw the biopic this needs to happen #Madonna #Cher https://t.co/TO08q9NmT2

I never thought the idea of her directing was a good idea. Producer yes, like Elton, but being so hands on could only ever be a disaster. I’d love her to write a biography instead.

Related: Rufus Wainwright just spilled the tea about Madonna: “She’s been quite mean to me a couple of times”