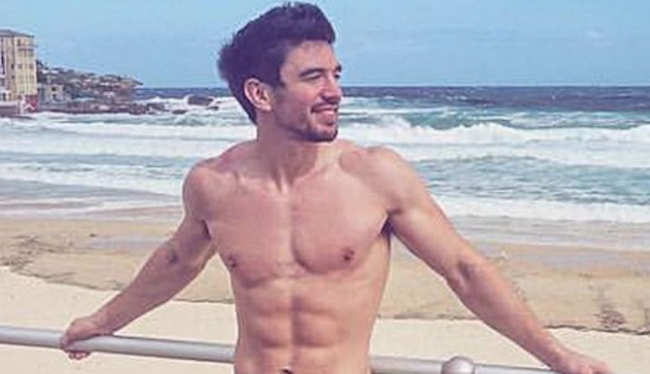 Steve Grand and skimpy swimwear is like Christmas morning and billowy sheets of snow lining the city streets; like the crispest orange leaves crackling underfoot in the Fall; like that first errant, beautifully burbling birdsong heard in Springtime, piping in so fluting and frisky from the sturdy branches of a pear tree in full bloom.

What we’re subtly trying to imply here is that Steve Grand and skimpy swimwear go hand in hand — and that is an immutable law of nature.

At times, the former underwear model and current country singer has tried to turn his back on Mother Earth, decrying the gay media for putting too fine a point on his ever-fine choice of summer swimwear. In fact, in July 2015, Grand made no qualms about expressing his displeasure at the lowest echelons of the gay media, who he felt paid far too much attention to the revealing attire he chooses to wear, and not nearly as much attention on the heartfelt sentiments he lays equally bare in songs like “All-American Boy.”

“I usually let things like this pass without speaking up about it,” he wrote.

It would be nice if any other aspect of my life/work as an artist/advocate got a fraction of the press I get for wearing a bathing suit by gay media. And no, this is not a “message to the ‘haters,’” but a message for those at all interested in what I have to say about me.

I have carved a unique path for myself as an artist/performer. My album debuted at #3 on Billboard‘s Independent Albums Chart last March. I’ve performed on National TV & in front of live audiences all over the world. I ran the most successful music Kickstarter campaign by an artist never signed on a label. I broke download records on bandcamp.com for my first song without management or a label. I’ve been sent overseas by the U.S. State department where I spoke out for LGBTQ rights and gave master classes to music students about the business from the perspective of an Independent artist. I’ve done more benefit concerts for the community than I can remember. I travel with live musicians despite it being far less profitable so that my fans get the very best show from me. I’ve never not stopped to take a picture with a fan, even when my meet and greets go beyond 2 hours. I’ve been so fortunate to connect with people in the very unique and special ways only singer/songwriters can and am forever grateful to my fans who have made it all possible! And I continue to invest every last cent into my work to the point of my own personal and financial detriment.

And a few more random thoughts…

Outside of my work as an artist/performer/advocate, I am a colorful, complex, deeply flawed, ever-evolving young man just happy to barely make enough doing what I love to get by. I am most energized when I am performing live, but other times, I would do Steve-Grandjust about anything to be invisible. I am nuanced, sensitive, and reflective, but on stage I am loud, confident, and in control. I am not simple. I am layers of apparent contradictions. I struggle in silence from crippling anxiety and depression that sometimes keeps me from leaving my bed altogether, but I also enjoy moments of incredible lightness and freedom. Nothing about me is black and white. I am every clashing, screaming color of intensity. I don’t believe in god, but I believe that human connection can be so powerful, it can feel supernatural. My capacity to love deeply is mirrored only by my ability to hurt and feel pain. I hate being made to feel like a victim but even more, hate to feel misunderstood. I feel so much compassion for my LGBTQ brothers and sisters, many of whom are damaged in all kinds of ways from the world we were brought up in, but I feel so much anger for the way I see how quick we are to judge and hurt one another. I have worked very hard for many years to do what I do, but I also recognize I have been very privileged in many ways. I love learning about the universe because it makes my life and my life’s respective worries and fears seem so small and insignificant. I don’t believe any person is any better or worse than the next. I wish want to find some peace and relief in this life that can often be so senselessly cruel.

Thank you for your continued love and support and for making all of this possible to begin with. Forever grateful to each and every one of you.”

After we reprinted his Facebook post in full, Grand directly addressed Queerty in an Instagram post, expressing his roiling displeasure at our shameless, borderline OCD, and utterly unyielding fascination with handsome men baring their flesh in the skimpiest of swimwear, and our fanatical — some might even say heretical — devotion to passionately sharing such images on our website:

No I want YOU to stop ONLY posting the handful of half naked pictures of me taken over the last 6 years to get your page clicks. I’ve taken thousands of photos fully clothed over the last years. only 1% of my posts (on Instagram) show my bare chest. There’s a time a place for that.. but EVERY time?

It is sites like YOURS that create the impression that I am always shoving sex in people’s faces. When, in fact, it’s a small fraction of the time. I have enough to work against. It sucks that gay media makes it all the more difficult.

And even now you’re doing the same thing in this post. To make me look like a hypocrite.

Shame on you for creating senseless division within this community that already faces enough from the outside world. You would tank a struggling artist’s career if it would get u a couple page clicks. Utterly shameful.

You have been trying to sink me since before I even started to climb. I’ve been silent 4 2 years of this & I’ve had it. Shame on u.

I should be able to post a shirtless pic here and there (1% of my Instagram) without it being the ONLY way you represent me.

All publicity is NOT good publicity.

If you can’t post about me in a way that even comes close to resenting me on the whole then I’d rather you not bother at all. Nick Jonas and Zac Efron flaunt their bodies WAY more than I do and are not treated this way.

There is nothing wrong with the pictures of me that are out there. I am not ashamed. I am a young man and SOMETIMES like to show my body like most all of us young men do. But you create this weird dynamic where you slut-shame as you simultaneously fawn over a young man. It is very bizarre and worse, it sends a toxic message to young people still coming to terms with their sexuality. Haven’t gay men been taught to feel enough shame about their sexuality?
#getyourshittogether #stopdividingus

I know I’ll get accused of whining and being a hypocrite. And I know I’m suppose to shut up and never stick up for myself. And I know I “brought in on myself” and I should have just known when I was a 19 year old student putting myself through college that I shouldn’t have posed in those kinds of photos (because none of you have ever made questionable choices when you were 19, right?) But I’m just a guy as flawed as all the rest of you. I’m not rich and famous. I just want to make music, play it for my fans, and yeah, sometimes have fun on a boat in a Speedo and share some of those moments with my fans who have been so supportive.

Okay, Internet. Do what you do to people who dare to speak up for themselves. Fire away.

But that was then, this is now. And here’s a photo Steve Grand posted to Instagram while wearing an admirable piece of lime-green, admittedly skimpy swimwear that shows off his impressive physique:

#TBT Sydney Australia for Mardi Gras last March. I need real beach day so bad. And not when I'm shooting a video ????? Hopefully will get some beach time during my stay in Ptown. First show starts on the 5th! I play every Tuesday, Wednesday, Thursday all through July and August. At the Art House. Come! 😀

That can only mean one thing: Summer 2017 is here.