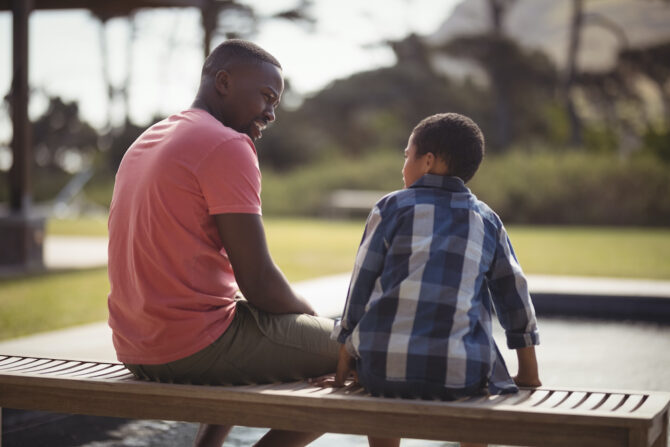 It’s never easy to have “the talk” with a child. And when discussing sexual relationships, many straight parents default to their own lived experience, illustrating only one hue in the spectrum of sexuality.

So we give props to the dad who signed onto Reddit and asked, “How do I, a straight man, teach my son about sex in a non-heteronormative way?”

This father told the users of the r/askgaybros subreddit that he knew it was time to talk about the facts of life when he and his 10-year-old were watching Eternals and the son started asking questions about the “relatively mild” sex scene.

“Later, we chatted, and I did my best to stumble through the basic biology of [penis-in-vagina] sex. (He thought it was hilarious, by the way.) Only afterwards, I realized that I talked about sex in a very heteronormative way,” the dad added. “How can I do better?”

Related: She thinks her 12-year-old son is gay. So what can she do to help him?

The question attracted a lot of productive comments — and some troll-ish ones, too, which put the dad on the defense.

“I’m not trying to push anything in to his mind,” he argued in a comment on the thread. “I just realize that, for me, sex means sex with a woman. Knowing that about myself, I want to make sure that he understands that there are other ways of thinking about sex that are equally valid. … I don’t want to send a message that the only ‘right’ way to think about sex is man plus woman.”

One commenter, helpfully, suggested the website AMAZE, the missions of which is to “[harness] the power of digital media to provide young adolescents around the globe with medically accurate, age-appropriate, affirming, and honest sex education they can access directly online.”

Another person gave useful advice: “I’d say that sometimes people have sex to make a baby, and sometimes people have sex because it feels good or because they’re attracted to another person, of whatever sex or gender, or because they want to make the other person feel good,” that person wrote. “There are a million different ways to get sexual pleasure and a million different kinds of people to do it with (and you can also do it by yourself), and you’ll discover as you get older who and what you’re into. People with penises often like to put the penis places — into vaginas, mouths, hands, bums, and even other things, if you’re careful, old enough, and everyone involved wants to. People with vulvas sometimes like their vulvas to be touched or kissed, in addition to or instead of having things put inside them. In all cases consent is the most important thing, yours and theirs, as well as safety to protect yourself and them from diseases and, if relevant, from pregnancy.”

One commenter told the dad to also “acknowledge that sex is about bonding and that heterosexual reproduction is a symptom/consequence that evolved to coincide with that desire for bonding, that the desire to be physical with someone is not a desire to reproduce, it’s a desire to bond in some way, and reproduction is merely a consequence of one version of that interaction.”

And a different Redditor boiled down the conversation to three points: “There’s difference between sex and love: One is physical and the other is emotional, [and] they’re often linked, but they’re different, and it’s possible to have one without the other. Mutual respect and consent need to be essential elements of sex (and love), and consent can be given or withdrawn at any time. Who you love is who you love, and someone’s love for another person deserves respect.”