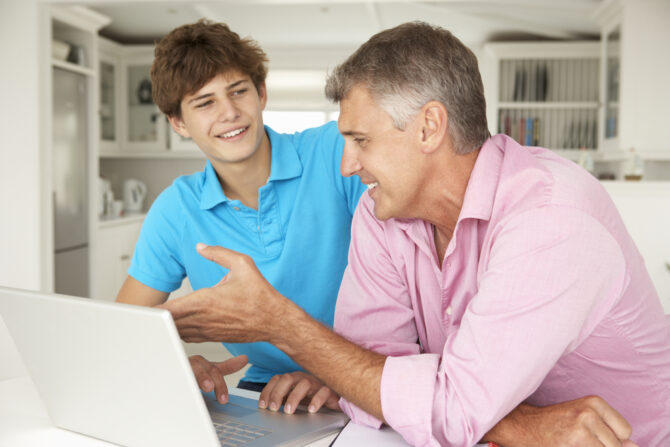 Within two months’ time, a teen went from closeted and single to out and dating, and he has his meddlesome father to thank!

As this 16-year-old recently recounted on Reddit, he came out to his dad more than a month prior, and his dad reacted better than his mom had. (In fact, the dad kicked the mom out of the house since she was pushing for conversion therapy.)

But the dad’s supportiveness verged on overbearing, as the teen told other Redditors. “He still is trying way too hard to be supportive—like, support dial on 1000%,” the teen wrote. “Don’t get me wrong, I am grateful for his support and know his heart is in the right place, but everything always seems to circle back to my gayness. I don’t want that to be my number one personality trait or be the focus of everything all the time.”

In fact, the dad is so supportive, he even urged his son to go on a date with a coworker’s son. And our hero was feeling ambivalent about that prospect at the time of his original Reddit post. “Him trying to set me up like this is kind of cringe, but also, I don’t know, it might be nice to actually go on a date with a guy,” he wrote. “I mean, I’m 16, and the only date I’ve been on was a failed double [date] with a girl, which obviously I wasn’t into. So I guess the question is, should I give it a shot or just keep telling my dad no?”

Commenters on the post were Team Dad on this one. Example reactions:

“Give it a chance. Either you like him or you don’t. Your dad is being amazing, and I wish more dads were like this.”

“I wish my dad and I had a relationship like this.”

“This is cringe and adorable. Props to dad! Go on the date.”

Related: Father of the year dedicates first tattoo to his gay children

In his first edit to his original Reddit poster, the teen said he was going to “give it a go” with his dad’s coworker’s son, adding, “He’s cute from the pic I’ve seen.”

Soon came another edit, in which the teen revealed that he and this prospective match had been texting for two hours. “He has also called me cutie twice, so I think it’s going well?” he added. “Going to go bowling tomorrow evening.”

Then, in the comments section, the teen offered the most heartening update yet. “It was awesome!” he wrote, with all-caps, exclamation-pointed enthusiasm. “He was even more handsome in person! Beyond looks, though, he was really sweet. Like, he got me flowers, which feels weird but also nice, and we had a total vibe! Kept laughing and joking around and even flirting. Well, he was flirting. I was trying and failing to flirt. That’s OK, though—he seemed to like it, ‘cause he kissed me! More than once, I might add! Plus, he told me he had a good time and texted me to say it again and ask if I want to do something again!”

Somewhere out there, a certain father is beaming with self-satisfaction.