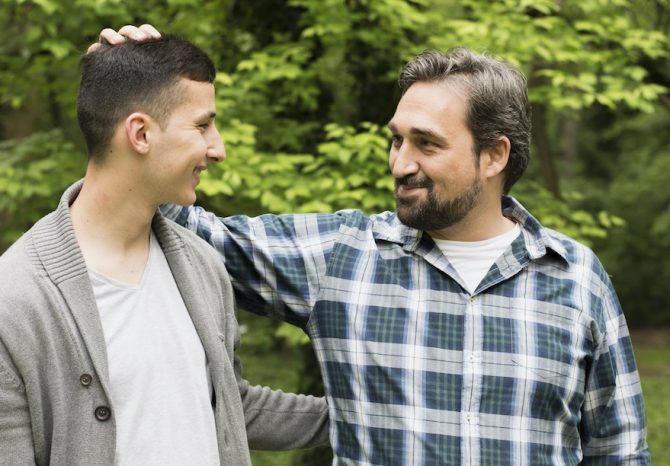 A single father took to Reddit recently to ask if he’s being too chill about his teen son’s coming out.

In his post, the dad says that his 16-year-old came out a few months ago. “I told him that I loved him and that it didn’t matter to me,” he recalled. “Truly makes about as much difference to me as what his favorite color is. We’ve always been very open about someone’s orientation not being an issue for anyone besides that person, so I’m pretty sure he knew I’d be fine with it.”

He went on: “My question, and this feels weird, is, am I not reacting enough? I know that coming out can be a big deal and in many cases, a very scary thing. Should I be talking with him more about it? Weird question I know, but parents worry about weird things.”

Related: Parent asks Internet for help with closeted son: ‘He is my life’

In response, contributors in the r/gay subreddit assured this guy that his response is one of the best possible coming-out reactions.

“The casual outlook/approach is ideal, IMO,” one wrote. “My favorite memory with my dad is us in the mall people watching, him testing out his gaydar and picking out potential suitors. You sound like you’re doing amazing already.”

Another guy said that he got a similar reaction from his mother. “Tbh I was kinda relieved,” he added. “And that was honestly probably around the same age as your son. Now, at 25, it’s still not a problem and never became a problem. So I think you’re doing awesome.”

A third commenter wrote: “First of all, it’s lovely to see you accepting your son just how he is. That’s all he wants. I don’t think you have anything to worry about if you have expressed that you don’t care. Just make sure he knows you truly love him and it doesn’t matter to you if he’s gay, straight, etc., that you just want him to be happy. … The best thing you can do is make him feel safe and secure with you. Keep being an amazing dad.”

And another wished his parents had a bigger reaction to his coming out. “I always joke about how I almost wish my parents were a little more surprised,” he wrote. “They found out by me just bringing a guy home after hooking up one day. In all reality, though, I was just itching for drama, so the best thing they could have done was not care. Haha.”

In short, the “NBD” approach can, in fact, be a very big deal — and in the best possible way.