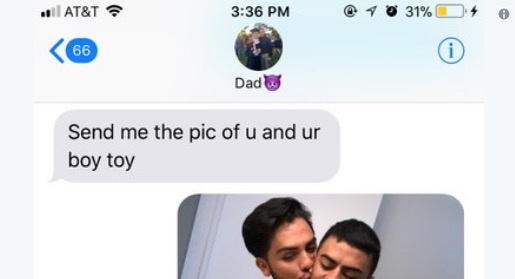 A father’s request to see his son’s “boy toy” has gone viral for the purest and loveliest of reasons.

A teen named Louis shared the text exchange between him and his father.

“Send me the pic of u and ur boy toy,” read Dad’s text, followed by two adorable photos of Louis with his boyfriend.

In the caption, Louis adds that his father wanted the photos so he could show off the couple at work.

Here’s the tweet that’s since been liked over 50K times and shared by 7K people:

So my dad shows off my boyfriend and I at work ?:’) pic.twitter.com/lQcQcRitxI

After a few days of overwhelmingly positive response, Louis added this to the thread:

Imma take this time to appreciate the parents i have. I’m beyond blessed to have been born into this life. To have parents who love my brother and I for us. Wouldn’t give it up for the world.? pic.twitter.com/hNgkqb4oJ8

“I just love that my dad was showing off me and Christian,” Louis told Buzzfeed News.

“Everyone was telling how much they love my dad — that he was the father of the year.”

He added that one commenter said, “Oh, I’m straight and my dad doesn’t even do this with me.”

Louis’ father, Louis Sr., was happy to learn his love had spread so far.

“It makes me feel good that people are out there giving me props,” he said.

He added that Louis Jr. has always been supported and loved in their home. “Always. Ever since day one,” he said. “Ever since he came out to us.”