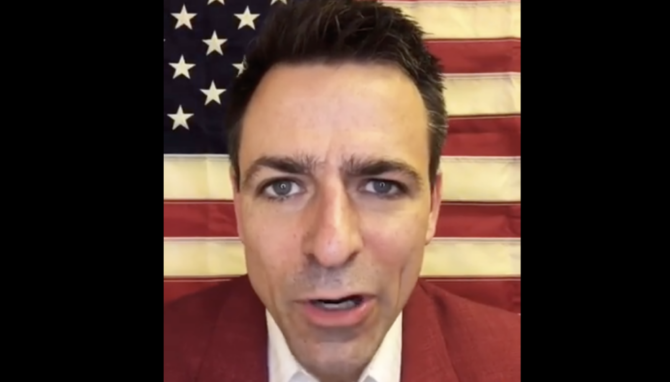 Seeing as a man who admitted to killing his wife with flower pot won his GOP primary from a prison cell in Indiana last month, it seems getting arrested isn’t quite the political career killer it once was.

That must be comforting to Michigan gubernatorial candidate Ryan Kelley, who was arrested on Thursday morning as the FBI raided his home.

Kelley, who blew his “groomer” hysteria dog whistle especially hard when he vowed to charge Michigan school boards with felonies if they failed to remove ‘sexually explicit content’ from classrooms, was arrested “on misdemeanor charges stemming from the Jan. 6, 2021 Capitol breach,” and is to appear in federal court in Grand Rapids Thursday, according to the U.S. Department of Justice.

Kelley is a real estate agent and currently one of five Republican candidates for Michigan governor. He was present at the Capitol when MAGA protesters rioted and stormed the building, and has continually denied doing anything illegal.

In June 2021, the Michigan Democratic Party posted a video of Kelley outside the Capitol appearing to shout: “Come on, let’s go! This is it! This is — this is war, baby!”

“Come on, let's go! This is it! This is, this is war baby!"@kelleyforgov pic.twitter.com/IrNc3Rv10M

Kelley was also heavily criticized for encouraging voters to “unplug voting machines if you see something you don’t like happening within the machine.”

Tampering with voting machines is, of course, a crime.

Ryan Kelley is a certified nut job who has repeatedly stalked and harassed Gov Whitmer, including showing up at her primary residence and vacation home. Don’t know details, but I have no doubt he deserved it. https://t.co/AsEEi9F8lI

Not only did Ryan Kelley participate in the insurrection at the US Capitol to overturn the election, but he told election workers in Michigan to unplug voting machines from the wall if "you see something you don't like happening with the machine."

It's a good day for democracy.

The FBI has now arrested the leading Michigan GOP candidate for Governor, Ryan Kelley, who was at the Capitol building on January 6, 2021.

On Jan. 16, 2021, an anonymous tipster alerted the FBI that Ryan Kelley was at the Capitol attack – providing photos. More tips followed, including from a confidential informant who'd been working with FBI to provide info on domestic terrorism groups since 2020.

Ryan Kelley is an insurrectionist who frankly shouldn't have been allowed to run for office. Hopefully, now he will drop out https://t.co/QCQ4OCjkwi

So to recap Michigan Gov:
-Two top GOP candidates were denied ballot access after each submitted thousands of forged signatures
-The candidate who led in the only poll after that, Ryan Kelley, was just arrested by the FBI (unclear for what but he was at the Capitol on Jan. 6) https://t.co/aeSZkf1tJu

The FBI used this photo of Ryan Kelley I took during a rally in Oct. 2020 in Allendale to compare with screenshots of media coverage from Jan. 6 riots. The sunglasses in particular were helpful to match, FBI agents wrote in their statement of facts regarding Kelley pic.twitter.com/B9lyIfq24s