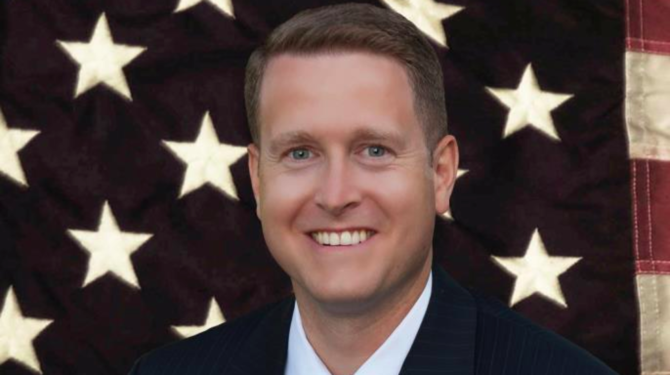 Matt Shea is a Republican member of the Washington House of Representatives. He’s also a raging homophobe. And he’s being investigated by the FBI for it.

The 44-year-old state politician recently wrote a secret four-page hate manifesto titled “The Biblical Basis for War”. In it, he describes the Christian God as a “warrior” and talks about a “Holy Army” that must slaughter anyone who supports same-sex marriage.

“If they do not yield–kill all males,” the document reads.

The document is organized in 14 sections with multiple tiers of bullet points and a smattering of biblical citations. Under one heading, “Rules of War,” it makes a chilling prescription for enemies who flout “biblical law.”

After the hate manifesto leaked online, Shea, who has a long history of opposing equal rights for LGBTQ people, went on Facebook Live to insist his “kill all males” remark taken out of context and to accuse critics of “smears and slander and innuendo and implication.”

“It was a summary of a series of sermons on biblical war in the Old Testament as part of a larger discussion on the history of warfare,” he said.

He also insisted he’s not an extremist, despite all evidence to the contrary, before arguing that the United States is “a Christian nation” and that we must rise against a so-called “counter state” consisting of dangerous “Marxists” and “Islamists.”

IT IS ELECTION TIME AND LIKE CLOCKWORK THE SMEARS, SLANDER, AND INNUENDO ARE BEGINNING…HELP ME STOP THE DISINFORMATION! Read Gen. Pacepa's book "Disinformation."

After reading the document, Spokane County Sheriff Ozzie Knezovich brought it to the attention of the FBI.

“The document Mr. Shea wrote is not a Sunday school project or an academic study,” Knezovich says. “It is a ‘how to’ manual consistent with the ideology and operating philosophy of the Christian Identity/Aryan Nations movement and the Redoubt movement of the 1990s.”

He adds, “I gave it straight to the FBI.”

The FBI has confirmed it is now investigating the matter.

Meanwhile, the Northwest Credit Union Association, which had supported Shea’s campaign, quickly distanced itself from the politician, requesting its campaign donation be refunded and issuing the following statement: “His beliefs do not reflect the views and values of our organization, member credit unions or customers.”

Shea, who represents Spokane in the state’s House, is up for reelection next week.

Related: Antigay candidate’s kids urge voters NOT to vote for him: “Dad’s a fanatic! He must be stopped!”