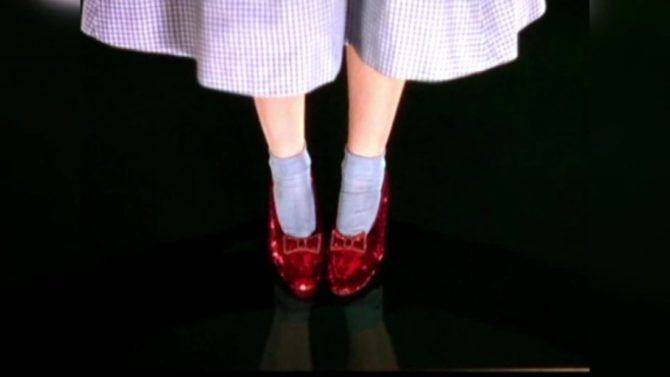 Call it taxpayer dollars at work.

FBI officials have announced a break in a 13-year-old case of theft: agents have recovered a stolen pair of ruby slippers. The iconic shoes, often referred to as the “Holy Grail” of movie memorabilia, went missing from the Judy Garland Museum in Grand Rapids, MN back in 2005.

Burglars broke into the museum in the night or early morning hours through a window and made off with the famous movie footwear worn by Judy Garland in The Wizard of Oz. Only four pairs of the shoes actually worn by Garland have survived the toll of history. Appraisers value each pair at $3-5 million.

Representatives for the Judy Garland Museum are over the rainbow at the news:

It's true! The RUBY SLIPPERS have been found! There will be a live press conference on Channel Eleven – a station from outside Minneapolis and likely other stations today at 1:00 pm. Central Time.

We can barely believe this news!!!! Stay tuned.

Anonymous tipsters lead FBI agents on a search that lasted almost a year and spanned four states. Since then, the FBI has identified multiple suspects in the theft. Agents recovered the slippers in an undercover raid in Minneapolis. After obtaining the shoes, historians at the Smithsonian Institution confirmed their authenticity. Further investigations into the theft are ongoing.

The ruby slippers took on their precious value beginning in the 1970s. A gay film historian named Kent Warner was allowed to take the shoes from MGM storage as payment for his help during an auction. The exact number of pairs manufactured for The Wizard of Oz–and indeed, the number reclaimed by Warner–remains unclear; film historians suspect that as many as seven pairs could exist, with Warner and subsequent collectors selling them on the black market.

In honor of the shoes coming home, and in honor of the gay icon that made them so treasured, we think the time has come for a little musical interlude. What better way to celebrate?