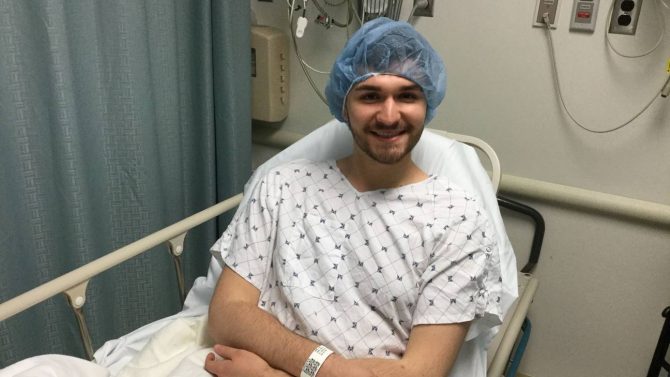 Some people choose to protest by venting on social media.

Others take to the streets and march.

24-year-old Barton Lynch decided to donate one of his organs.

“I had been donating blood my whole life, and it was good way for me to give back,” he tells Washingtonian. “Not that long ago I started dating guys, which now eliminates me from being able to donate blood.”

During the AIDS epidemic in the 1980s, the FDA banned all gay and bisexual men from donating blood. In 2015, it updated its policy to say that gay and bisexual men could now donate blood so long as they hadn’t had any sexual contact with another man for at least 12 months.

In other words: Gay and bisexual men must be completely celibate for one full year before they can give blood–a rule that does not apply to their heterosexual counterparts.

“This frustrates me to no end, because I think it’s based on outdated science and outdated [HIV] scares,” says Lynch. “Other countries have changed their collection procedures and they’re not showing adverse effects … The technology for detection of HIV has advanced a lot since the ’80s.”

So Lynch found a way around the system… by checking into MedStar Georgetown University Hospital in Washington, D.C. and giving one of his kidneys instead. He calls it a form of “philanthropic activism.”

“I didn’t go to work for three days,” he says, “so that someone could have their life given back to them.”

Lynch wasn’t told who his kidney would be going to, but he’s happy to be able to give it to them.

“It goes into the other person the same day. I don’t know anything about the other person. I sent them a letter, and they can either read it or not, and reply or not. As far as I know, they have not done anything. But I did hear that it was a successful surgery.”

As for the FDA’s restrictions on gay men donating blood, Lynch hasn’t given up that fight.

“I sent a letter to the secretary of HHS last night,” he says. “When we are constantly in need for blood, as a society, and you’re excluding an entire category of people for a reason that’s not based in science, it’s crazy to me.”

He continues, “At this point, I’m just reaching out and trying my best to raise awareness. I mean, I’m one person but I’m trying to make the noise that I can.”

“It’s a priority of mine to give of myself, to be a good volunteer, to frequently donate. Donating a kidney is more serious than donating blood, but it’s the same kind of equation for me. Low impact and high reward for someone else.”

Related: Five Reasons Why Homophobia Is The Only Possible Reason The FDA Won’t Change Its Ban On Gay Blood Donors