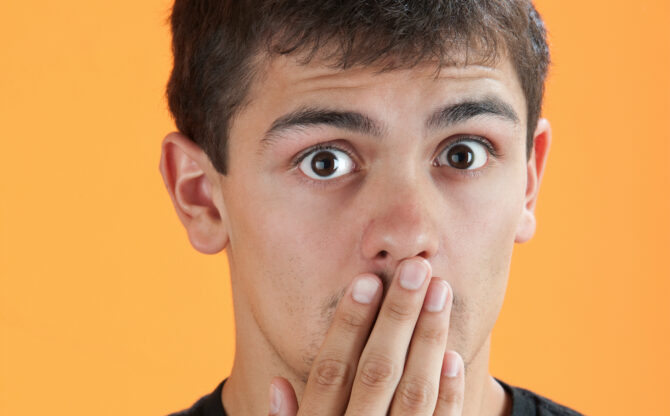 Wandering eyes almost got one Reddit user into trouble recently, and now he’s wondering how to handle being caught checking a guy out.

This user, whom we’ll dub Looky Lou, said he was walking up a flight of stairs at a train station when an older gentleman breezed past him. And Lou took the opportunity to take a look at this gent’s caboose.

“Unbeknownst to me, his son was behind me, and as he passed me, the next thing I heard was the kid say, ‘Dad, that dude’s looking at your a**.’ I clearly wasn’t being as subtle as I thought,” Lou recalled. “I could hear them having a laugh about it as they walked away. Thankfully, [there] didn’t seem to be any harm done by it, but [I’m] kind of worried that someone more homophobic might have hit me or something.”

Commenters on Lou’s post offered tips for that scenarios, some of which were more helpful than others. (After one person said, “Lick your lips,” another replied, “Literally the worst advice.”)

Multiple Reddit users said smiling is the best strategy. “People get stared at all the time in public,” said one. “As long as you aren’t locking eyes with strange men and staring them down that way, they won’t think you’re trying to start something. And for goodness’ sake, if you get caught, smile. It means you’re not trying to start something by staring at them.”

Added another: “It’s always flattering being checked out, so you shouldn’t be ashamed of doing it, as long as you’re not a total creep about it. As someone said here, just smile.”

One guy puts his “bushy” eyebrows into service in these situations. “I worked in a mall during my semester break. Lots of hot guys,” he said. “There’s this cop who always removes misbehaving people, and I’d always check him out. He caught me finally, and I just raised my eyebrows (I have two bushy ones) quickly almost like a question, and he just laughed.”

Other commenters just told Lou not to stress. “Men size each other up all the time, and attractive people get more looks in public,” one wrote. “I wouldn’t think anything about it.”

Another added, “It’s flattering. I’m guessing he took it that way. I’ve always loved when people look at me that way (which is more past tense than present these days). I wouldn’t worry about it.”

Another tactic, according to commenters on the thread, is to “play it off” with a canned line. They offered examples:

“Do I know you from somewhere? You look familiar!”

“Wow, where’d you get those cool pants?”

“I’ve been trying to get stronger gluts/calves/back muscles. But nothing I seem to do works. I’m just wondering what you do.”

But one Redditor gave Lou a reality check about the daddy at the train station: “If he’s old enough to have a kid old enough to say that, he’s grateful he and his a** are still getting looks.”