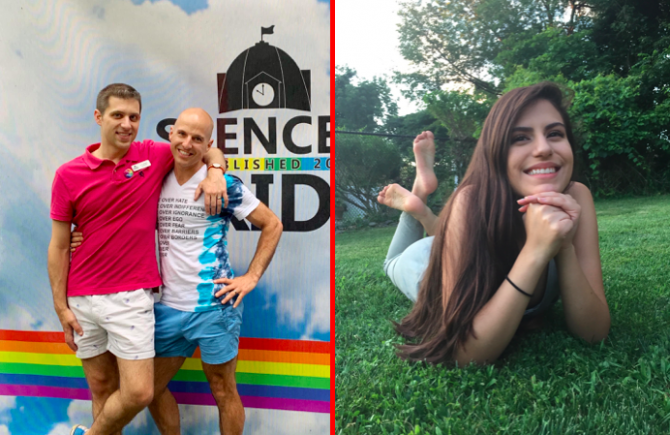 It was Election Night 2016, and unlike most Americans–whose eyes were peeled to the TV–Heather Gilfillan was in her bed, blissfully asleep.

“I actually had to wake up super early the next day for class, so wasn’t able to stay up [that night],” Gilfillan, who identifies as bisexual, tells Queerty. “But before I had gone to bed, it didn’t seem like Trump was going to win. I went to bed feeling hopeful.”

But as soon as she woke up, Gilfillan’s state of happiness quickly turned dark. She recalls going on her phone to check Twitter, only to see a celebratory Tweet from a local Trump supporter. It seemed her worst fears had been confirmed: Trump had won, and was now going to be President.

“It was difficult for me to even get out of bed. I went to my class, and I actually couldn’t even stay for the whole thing because I was so frustrated and upset,” she says. “Seeing people walk around with huge smiles on their faces made it so much worse.”

Unfortunately, nearly three years later, things have not fared much better for Gilfillan, who represents one of thousands, if not millions, of LGBTQ people living in conservative places around the country.

Gilfillan resides in Stillwater, a rural farming town located in northern New Jersey. The town is home to 3,920 residents, most of whom are white, conservative Republicans. Nearly all of them are “close-minded” and “not accepting of anyone that isn’t white and straight,” according to Gilfillan.

In fact, it’s common to hear the word “f*g” tossed around like “it’s nothing at all,” and any kind of emotion shown by men is “considered gay,” she says. When gay marriage became legal in the United States, Gilifallan would often hear people in Stillwater complain because “they absolutely hated hearing about anything to do with the LGBTQ community.”

As a bisexual woman, Stillwater is an odd place for Gilfillan to be.

“It’s so strange. I don’t see it anywhere else,” Gilfillan says. “The fact that you can come here and still see Trump signs is extremely embarrassing. Like, there’s one that’s drilled almost 15 feet up a tree trunk so that nobody can take it down. It feels almost cult-like. People still have Trump bumper stickers on their cars, wear Trump hats and shirts, and talk about him like he’s some kind of God.”

That said, Gilfillan’s experience is not representative of all LGBTQ individuals living in red states.

Just ask Jacob Balash, who lives in the small town of Spencer, Indiana (population: 2,250) with his husband, Jonathan. Balash, who identifies as gay, is the co-founder of Spencer Pride, an annual festival the town has held for the last 13 years.

Even though he lives in a red state (Trump won the election in Indiana with more than 56% of the vote), Balash says his town and its festival is a living testament to the fact that not all red areas are full of conservative, closed-minded people.

“One of the things that surprised us when we started Spencer Pride was how many progressive people were already living here and had spent their entire lives here,” he says. “Until we came and [started Spencer Pride], there hadn’t been an opportunity for other like-minded people to show their support.”

That said, it hasn’t been all positive. “We’ve experienced some vandalism,” Balash admits. “Our pride flag has been stolen more times than I can count, our mailbox has been destroyed, and we’ve had a few eggs thrown at our property.”

“When interviewed by the Sheriff’s department, [the teens] confessed that they had done this because we were ‘big time queers,’” Balash says with a laugh. “I’m glad to know we’ve finally hit the big time. That must mean we are making a difference if these kids were so insecure about the makeup of my family.”

Following the incident, Balash says more than 200 community members hung up pride flags in their homes as a show of support. He also created and printed a batch of ‘Big Time Queers’ T-shirts, all of which sold out shortly after they were made.

Because of the kind of support he has seen in his town, Balash has no plans to relocate to a larger, more accepting city, such as New York or Los Angeles.

“I feel passionately that progressive-minded people should stay put and help make change where they are,” he says. “If everyone who is open-minded flees to the coasts, the middle of the country will never change.”

Kedryn McElderry, a gay male who lives in Kalispell, Montana, and who just this month helped organize Kalispell’s first ever Pride Festival alongside the town’s non-profit, Love Lives Here, shares similar thoughts. Though he still acknowledges that bigotry is alive and well in rural areas.

In one instance last April, a Kalispell-based parent sent a letter to the local newspaper after someone read “Prince & Knight,” a gay-inclusive fairytale, to a group of preschoolers at the town’s library.

In the letter, the parent said she considered the topic of gay marriage to be “totally inappropriate for an audience of preschoolers,” and was disappointed the librarian did not notify her in advance that she would “introduce such a controversial subject to innocent children.”

Even with instances like these, McElderry believes progress is being made.

“I can tell you for certain that our climate here is changing, but in different ways than we expect,” he said. “Sure, things get really bad for periods of time, we have incidents with churches and newspapers, but those bring gifts of their own. Allies come out of the woodwork and rally support, businesses open their doors, and connections are made [between organizations and allies alike].”

And as for Gilfillan? Well, don’t expect her to stick around Stillwater, New Jersey much longer.

“I enjoy little to nothing about my town,” she says, bluntly. “The people here are racist, sexist, and homophobic and it’s honestly exhausting. Once I finish school and have enough money to move out and start my life, I’m going to move very far away from here.”

But not before she attends WorldPride in New York City. After all, it’s only a state away, and is a celebration Gilfillan is all but blissful to take part in as an LGBTQ individual.

“Pride means a lot to me,” she says. “Each time I go [to Pride], I can’t help but cry tears of joy for a minute or two. I think it’s so important to celebrate how far the world has come in accepting the LGBTQ community. Being unapologetically you is something to celebrate, and I love the fact that we have an entire month to do that.”