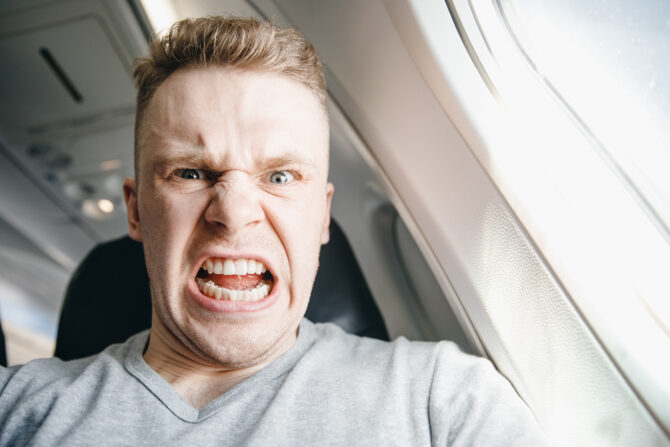 A passenger seated in first-class was arrested after allegedly assaulting a Delta Air Lines flight attendant and calling him homophobic slurs on a flight from Atlanta to Phoenix.

Christopher Alexander Morgan’s disruptive conduct reads like a checklist for a flight crew’s worst behavior — he refused to wear a seat belt, fully reclined his seat prior to takeoff and wouldn’t return it to its upright position, demanded more alcohol and became verbally and physically aggressive. That’s bingo!

After one flight attendant had to force Morgan’s seat up so the flight could depart, Morgan was served one drink. When he asked for another, a second attendant refused and instead offered him a non-alcoholic drink, according to the complaint.

Morgan responded by tossing his ice at the flight attendant and calling him “queer” and a “f*g.” A passenger tried to calm the situation, but Morgan’s behavior continued, according to the document.

The flight attendant walked towards the cockpit to use a telephone to inform the captain of the disruption. Morgan allegedly followed him and interrupted the call by grabbing the phone and hitting him in the chest with it. A passenger confirmed they saw Morgan throw the phone at the flight attendant.

Law enforcement was there to greet the plane when it landed in Phoenix.