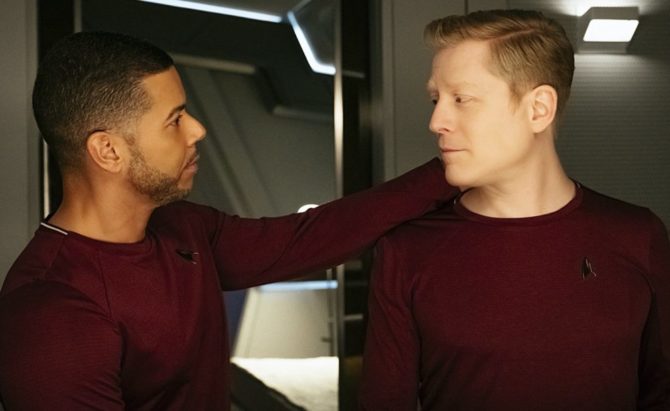 The latest incarnation of the Star Trek franchise features the first two canonical gay characters in Trek history (about damn time too!), Paul and Hugh, played by Anthony Rapp and Wilson Cruz. Rapp may get a bit more screen time as the ship’s engineer. But Cruz, as the ship’s doctor, gives the series an extra dose of sincerity.

Oh, and the two are a happy couple!

On that point, it really makes you wonder…

Did the two meet on board the ship, and were they the only two gay people around?

Did they meet before enlisting and make a point of being assigned to the same starship?

Are there other gay members of Starfleet on board who haven’t been featured yet?

So many burning questions.

And while you wait for answers (get comfortable), enjoy a tender moment from this week’s episode.

This was the cutest thing! And the first gay kiss in @startrekcbs am I right? @wcruz73 @albinokid ?? pic.twitter.com/QHccNuDL5r