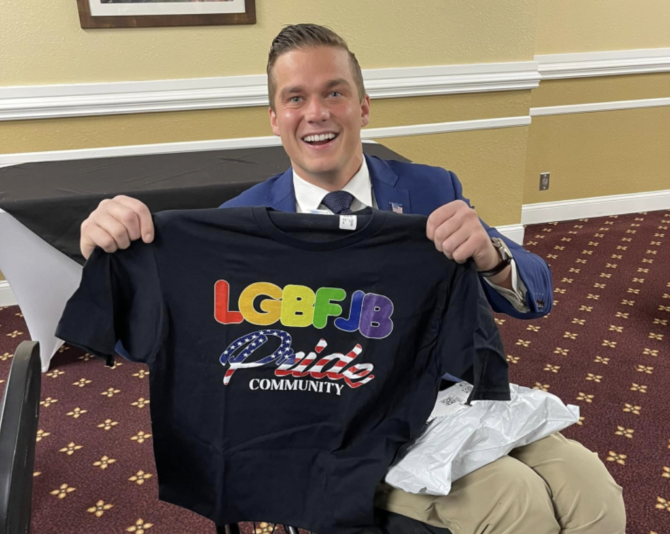 Republican voters in North Carolina are currently hitting the polls to determine whether to make Madison Cawthorn a one term congressman. He’s facing seven challengers in today’s primary and things aren’t looking great for the young Nazi enthusiast.

If that wasn’t bad enough, five former volunteers who worked for Cawthorn’s campaign have just come forward to share their experiences with him to Business Insider and–surprise!–none of them had anything positive to say about it.

“He fooled the hell out of everybody,” Bruce Rose, who volunteered for Cawthorn for four months back in 2020 says. “I despise him … He is a criminal and a performer.”

“He changed. If you tout the law, you have to stand for the law, and he doesn’t.”

“It became all about Madison and not about district 11.”

Former volunteer Debbie Brogden echoes this sentiment, saying, “It seems like he’s forgotten where he comes from and who got him there.”

“He had this vision of what he wanted for the conservative Americans,” she adds. “I just was enthralled that somebody that young could be that powerful. It has been so heartbreaking to watch him turn into what he’s turned into.”

“He’s just an entitled little boy,” Rose says. “He has not grown into manhood.”

Another former volunteer labeled Cawthorn “irresponsible.” And another likened him to a cult leader, saying “I had people in the community that were trying to get me back on track. But at that time, I couldn’t see past what I thought was going to be something really tremendous and something really good for district 11.”

All this comes less than one month after Lisa Wiggins, a former campaign aide to the anti-LGBTQ congressman, described her ex-boss as a “habitual liar” and a “bad person” then filed a workplace complaint against him for allegedly violating the Family and Medical Leave Act by rejecting her time off request when she was going through a family crisis.

“He’s a habitual liar and he’s going to say and do anything he can to your face but behind your back he’s completely opposite,” Wiggins said in a leaked phone recording with David Wheeler, the co-founder of a PAC nicknamed Fire Madison Cawthorn.

“People need to know how this man really is… He’s still got a lot of people fooled.”

In response to the Business Insider piece, Luke Ball, a spokesperson for the Cawthorn’s office, says they “understand a small handful of former volunteers are backing other candidates in the GOP primary, and that they are hoping to tout their candidates to the media.”

“That is their prerogative, and we look forward to uniting the NC-11 GOP behind Congressman Cawthorn following a decisive victory on May 17.”