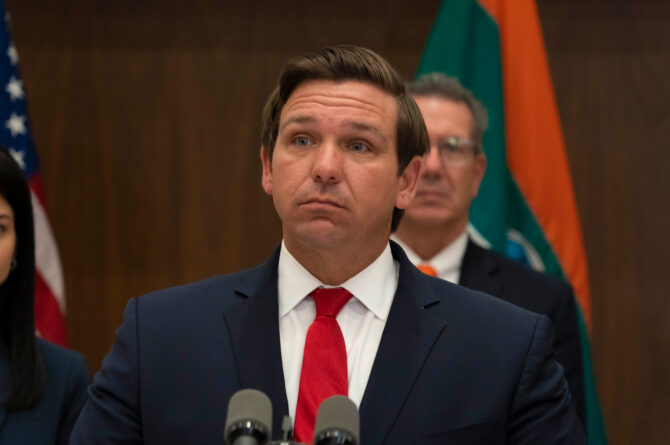 Gov. Ron DeSantis (R-FLA) on Thursday criticized the commemoration of the Jan. 6 Capitol insurrection as a ploy by Democrats and the media to damage former President Donald Trump and his supporters.

He went so far as to call it “nauseating” and a “politicized Charlie Foxtrot.”

Here’s a portion of what the Governor said pic.twitter.com/BPXjegLkcz

That left many viewers wondering…what the hell is a Charlie Foxtrot?

Well, after that question was answered — Charlie Foxtrot is “military slang for a chaotic situation—that is, a clusterf*ck” — many were quick to point out the pot calling the kettle black.

No Traitor DeSantis. What Trump did to this country, which you helped, is a Charlie Foxtrot.

The state of Florida is a Charlie Foxtrot and its Governor is a nauseating example to Floridians sick of COVID.

Getting covid and covering it up sure is a Charlie Foxtrot, you Mike Foxtrot.

If Ron DeSantis wants to see a real Charlie Foxtrot he doesn’t need to look any further than an ICU in his own state.

Charlie Foxtrot!?! As in Cluster Fuck? Isn’t that the code name for DeathSantis’ COVID plan? Also, is that his “Surgeon Genital” picking at his nose and face? Who’s the idiot smiling behind him? DeathSantis is a Charlie Foxtrot. https://t.co/Oiy3nTp4NA

Charlie Foxtrot is trending. For those of you who do not understand what this means, it’s this in a nutshell
👇🏼 pic.twitter.com/e2ijTJOh7v

Charlie Foxtrot is a weird way to say domestic terrorism.

charlie foxtrot means cluster fuck. as in, ron desantis’ handling of covid has been a charlie foxtrot. pic.twitter.com/N5R1heA6qd

In the twelve months since the Jan 6 riots, 70 people from Florida have been arrested — more than any other state.

Meanwhile, DeSantis’ response to the pandemic has been widely criticized, including comments he made last year that people’s decision to remain unvaccinated “really doesn’t impact me or anyone else.”