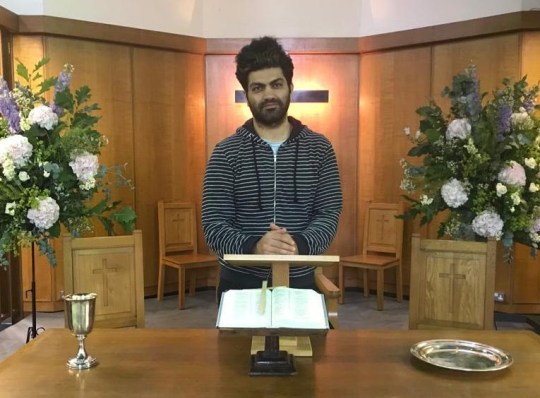 A gay Iranian man in U.K. who says he was raped in Iran “for being Christian” is now facing deportation for the second time.

The 38-year-old man, identified only as “Madhi” in the press, escaped Iran following his attack in 2016. He landed first in Germany, where he was forced to eat garbage and faced persecution by street gangs before moving to the UK last year. There, he managed to start a life.

Unfortunately, because Madhi entered the U.K. illegally, immigration officials have been trying to deport him. The first attempt was made last June and resulted in Madhi attempting suicide over the ordeal.

“Madhi slashed his wrists,” his boyfriend Ian told MetroUK. “He wanted to die. He couldn’t speak for three days. He was put on a plane in just his underpants covered in blood with no medical attention whatsoever.”

U.K. law mandates that anyone entering the country illegally be returned to their country of entry; in Madhi’s case, Germany.

“He was sent to Germany but the authorities there refused him entry,” Ian explains. “Within three hours they put him on a plane and sent him back to England.”

Madhi was allowed to stay in the U.K. for medical treatment. He spent time in a psychiatric ward to tend to his mental health. After his release, he and Ian joined the Winchmore Hill United Reformed Church where they developed a support network.

Now, the church is appealing to the British government to grant Madhi permanent asylum.

“He was tortured based on his Christian faith,” said churchgoer Charlotte Kahn. “And as a gay man, everything is just doubled.”

Members of the Winchmore Hill Church have launched a Change.org petition in hopes of keeping Madhi in the UK. At present, it has already won more than 20,000 signatures.

“It’s a worry that if he is ever sent back to Iran, it will be a death sentence. Even being sent to Germany, he is such a vulnerable individual.”