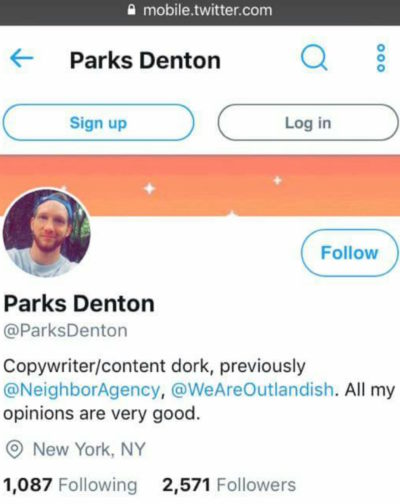 They thought he was just some vaguely good-looking, otter-esque copywriter, complete with that obligatory ironic sense of humor and overextended social media presence.

Related: After being catfished by students on Grindr, this beloved high school teacher is fighting for his job

But they soon came to realize Parks Denton was not a real person at all: Gay Twitter had just been hardcore catfished by someone who latched onto the handle @ParksDenton and sent out a flurry of DMs, befriending dozens of smitten gay men along the way.  Today, everyone is reeling from the blow.

They trusted him. Conversed with him. Agreed to go out for drinks — even if he never showed up.

And then one day…

As you can see below, now everyone is freaking right the fuck out, and some devilish internet prankster – who’s out there, somewhere – is cackling with the most wanton abandon:

People were catfished by someone claiming their name was Parks Denton? pic.twitter.com/2nRovglHOz

Should I be offended #ParksDenton didn't try to Catfish me? pic.twitter.com/G5Z87gnWbT

Ok nvm found the real person, who called out the evil twin days before Parks Denton was destroyed. pic.twitter.com/GJ6tCdskie

I ate (literal) ? pudding tho and now I feel better.

Deciding if I should out his @ or not ?

For a hilariously thorough investigation into the entire Parks Denton brouhaha, you can check out this meticulously researched New York magazine story.