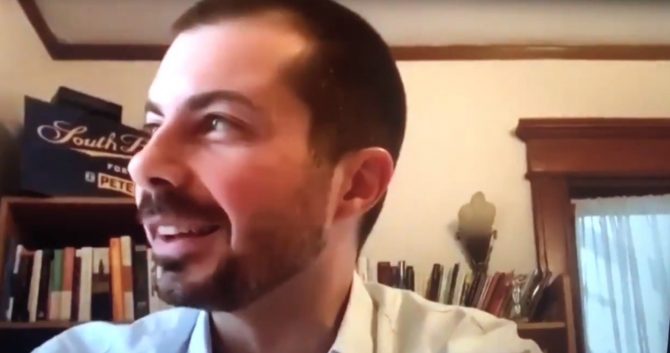 Former South Bend, Indiana mayor and Presidential Candidate Pete Buttigieg has shaved his head, and the internet is loving it.

Buttigieg sported his new look in an interview opposite husband Chasten Buttigieg for Georgetown University’s Institute of Politics and Public Service. Admirers of Buttigieg took to Twitter to express their love of the Mayor’s new look.

So @PeteButtigieg shaved his head during quarantine. So there you have it to all your trolling naysayers. He is more than gay enough! #PeteButtigieg #BeardEdgeEdge pic.twitter.com/UlcsnEFqgx

“All I’m saying is, its not that bad. It needs a little getting used to but I dont think Chasten is complaining so…” echoed user @Ginaddict1010.

Buttigieg also acknowledged his new ‘do’ during his interview. “A little bit about do-it-yourself-hair care,” he quipped. “Let me just say that the work that a barber does is now in my mind right alongside television presenters and professional cooks as something that is a lot harder than it looks.”

?BREAKING NEWS? ?@PeteButtigieg? debuting a new haircut on #GUVirtualForum & and talks more about the status of #BeardEdgeEdge! I think Pete’s new look will break the Internet #TeamPete ????????????? pic.twitter.com/NCCxcpnxLm

All I’m saying is, its not that bad. It needs a little getting used to but I dont think Chasten is complaining so…?

Buttigieg previously made headlines for growing a short beard after a photo of him sporting a CGI beard went viral. The new look spawned the hashtag #BeardEdgeEdge, a play on one of Buttigieg’s campaign slogans, “Boot Edge Edge.”

Pete Buttigieg made headlines last year when he became a major contender for the Democratic Nomination for President as an out-gay man. He won the Iowa Caucus earlier this year, before withdrawing from the race and endorsing Joe Biden for the nomination.