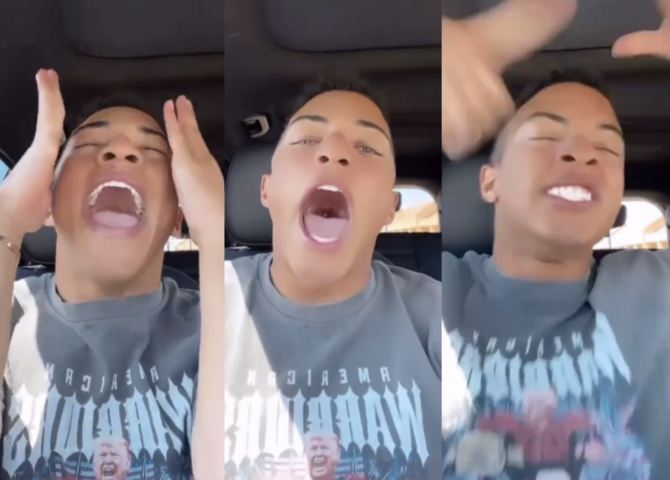 Right-wing troll Christian Walker has been on an anti-trans Twitter tear the past few days, railing against transgender swimmer Lia Thomas for winning first place in the National Collegiate Athletic Association’s first division swimming championship and ripping into Judge Ketanji Brown Jackson for refusing to engage in a transphobic debate with Marsha Blackburn during her Supreme Court nomination hearing.

Yesterday, the 22-year-old gay son of U.S. Senate candidate Herschel Walker tweeted: “Last week a biological male beat women in a women’s sports division. This week a Supreme Court justice nominee refused to define the word ‘woman.’ There’s a war on women. We need to step up to protect our mothers, sisters, and daughters.”

There’s a war on women. We need to step up to protect our mothers, sisters, and daughters.

This isn’t the first… or second… or third time Walker, who believes Black people are “more racist” than white people and objects to being called “gay”, preferring to be called “a conservative who likes men”, has made transphobic comments on social media.

Last week, he posted a video of himself yelling in his car about how he is “done” with “ball sacks in women’s spaces.” This immediately drew criticism from people who reminded him that he used to be a competitive cheerleader in high school and shared videos of him wearing high heels while dancing to Christina Aguilera’s song “Dirrty” in a women’s dance class.

NO BALLSACKS IN WOMENS SPACES pic.twitter.com/sakN7oTcDl

Now, here’s how folx responded to Walker’s transphobic tweet about the “war on women” yesterday…

Where was your outrage when @Caitlyn_Jenner was awarded woman of the year?

Just what women want, another man telling them what they need.

Please I beg you, be more original with your tweets.

So you’ll be going to Russia to help free our female athletes detained?

Can you find russia on a map.

There’s a war on women that’s coming from the Republican side of the aisle. And unless you identify as a woman, you should sit this one out.

I can protect myself thanks