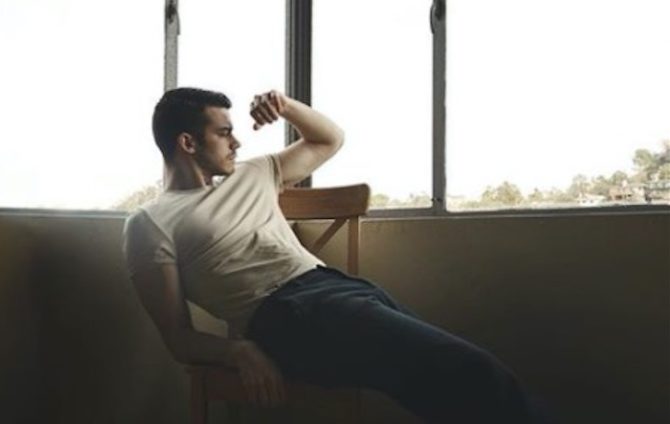 In a week of cryptic coming outs (see: Harry Styles and Glee actor Kevin McHale), a star of the upcoming gay teen dramedy Love, Simon has come out publicly as gay.

23-year-old Joey Pollari, who plays Lyle in the film, got candid about his coming out experience in an interview with the Advocate.

That started with the very first person he had to come out to: himself.

“The only part that was difficult was me coming out to myself. And I think that is the most difficult coming out,” he said.

Big love to the cast and crew of this movie, to @gberlanti for directing this step forward for a major motion picture, to @beckyalbertalli for writing the novel that inspired it, and to Denise Chamian for casting me. Many many more creatives, runners, PAs, grips, drivers, loved ones, etc who make these things happen. Happy to be a part of it. Xo

His timing couldn’t be more perfect. Love, Simon, which is being touted as the first mainstream teen coming out film, hits theaters across America on March 16. It’s a pivotal moment, as the success of the film could tangibly highlight acceptance at its most widespread in history.

“His experience was similar to mine.”

Related: There’s even more to love about “Love, Simon” in the new extended trailer

“I think all my friends and family knew on some level,” he added. “I think maybe two people were shocked.”

Among those who knew was his mother.

“My mom knew. She laid hints for me everywhere. A lot of the trouble was self shame. I do believe a system of power, of patriarchy, of masculinity did impact me.

a happy clam at the #lovesimon premiere ;; love to @elienmaalouf for helping my face, my team for helping me get here. Xo @joeymonroe @todiscon

“The greatest difficulty I found was that it didn’t match my idea of myself. It seemed incongruent with the future I imagined for myself, the identity I had struck up with others. The interplay between me and women, me and men, now suddenly seemed entirely different. That just didn’t seem fair or right.”

He also highlighted that while the film’s story is a novel approach in mass-marketed cinema, love stories at their core are strikingly similar.

“Every love story, gay or straight, has to come from a place of coming out of some closet of some previous fear into a new territory. This one just makes it a little bit more explicit and ties it to the gay experience.”

Prior to Love, Simon, Pollari played Tyler in the Disney XD movie, Skyrunners.

Related: “Love, Simon” star Nick Robison’s brother came out while the film was in production: