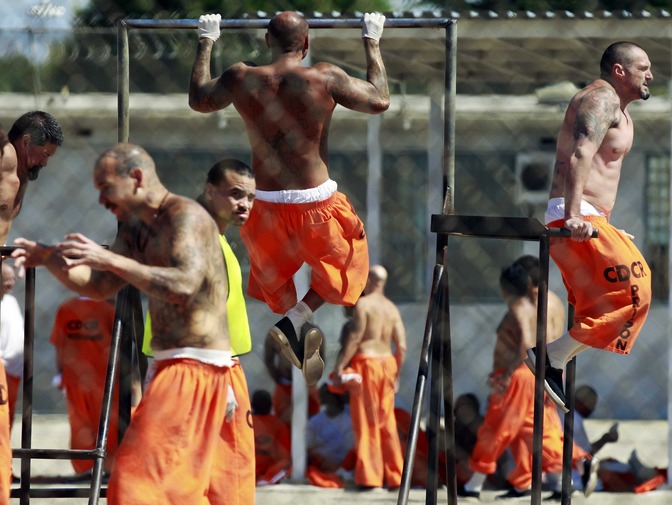 In a disturbing new article published by Gay Pop Buzz, a bisexual man opens up about the horrors he experienced while serving time in an Illinois state prison.

In 2010, Ron was sentenced to prison for several drug charges. He was 30 years old, bisexual, and had never been locked up before.

His first week at the facility wasn’t as bad as he had feared. Then week two rolled around.

At the beginning of my second week, three members of the Latin Kings (LKs) forced me to have sex with them. I tried to tell the them no but quickly found out that when the LK’s want something, they get it. One of them used a piece of rebar and struck me on the side of my head, knocking me out cold. When I came to, I woke up in a shower stall with white stuff on my face and butt. I was also bleeding badly.

Ron grappled with reporting the assault to the corrections officers but ultimately decided against it.

But his problems only escalated from there.

“After you get raped by a gang in prison, they basically own you,” Ron explains. “I learned this the hard way because a fews days after being gangbanged and group raped, the same three LK’s did it again to me.”

When he tried calling for help, Ron says, a knife was pressed up against his throat.

What happened next is truly, truly disturbing:

They rustled me into a porters closet and told me to strip down. There was nothing I could do as two of them forced me on my knees while the third kept watch.

Without lube or condoms, the bigger of the three rammed his d*ick up my butt. I couldn’t help but scream because I was in excruciating pain. That’s when one of them punched me in the face then shoved his d*ck in my mouth.

It didn’t end until all three of them finished what they had set out to do.

Ron says he eventually became the “property” of the LKs and was constantly at their mercy, both when it came to fulfilling their sexual needs and being their “slave,” and he was passed around from guy to guy on a near daily basis.

“If you try to show the slightest bit of disrespect, the punishment is severe,” he says.

For nearly two months, various members of the LKs repeatedly took turns gangbanging me … over and over again. Do you know what it’s like being constantly raped or living in fear of it?

The abuse didn’t stop until one day Ron was hurt so badly by two men that he had to go to the prison infirmary to be treated for rectal bleeding.

After that, he managed to convince prison staff to put him in solitary confinement. He spent 23 hours a day in a 12-foot concrete cell by himself, with no TV, no books, and no interaction with anyone else.

“But it was a lot better than being forcibly raped by other men,” he says.

Ron was released in 2015. He says he still suffers from PTSD and has flashbacks of being gang raped from which he expects it will take him years to recover.

“Being an inmate is already hard, trust me,” he writes. “When you are abused, gangbanged and violated, it makes trying to do your time all the worse.”

Related: Former inmate shares the horrors of being gay in prison