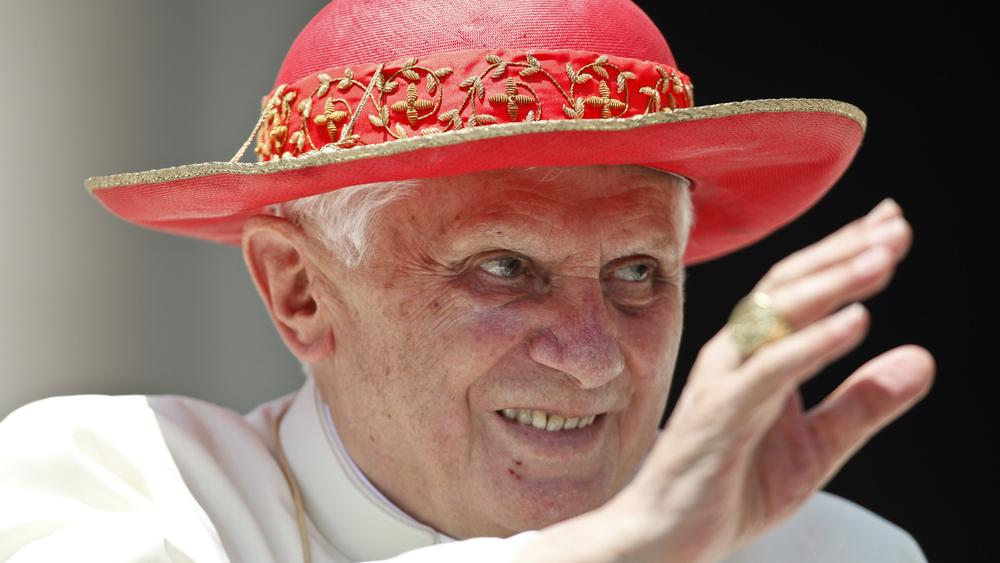 From 2005 to 2013, the Catholic Church was ruled by Pope Benedict XVI, Joseph Ratzinger (or as we liked to call him, Papa Ratzi), a 78-years-young man who allegedly battled the Vatican’s secret “gay lobby”

Now retired, Papa Ratzi has taken to the countryside to write out-of-touch letters blaming the 1960s sexual revolution and teh gayz for his church literally raping thousands of kids for decades with his help.

His letter basically says that childhood sex education and the church’s increasing moral relativism (losing its position as the infallible arbiter of good and evil) were both responsible for creating a climate where pedophilia spread through the Church.

In his letter, Ratzinger writes:

In the 20 years from 1960 to 1980, the previously normative standards regarding sexuality collapsed entirely, and a new normalcy arose that has by now been the subject of laborious attempts at disruption….

The matter begins with the state-prescribed and supported introduction of children and youths into the nature of sexuality…. Part of the physiognomy of the [Sexual] Revolution of ‘68 was that pedophilia was then also diagnosed as allowed and appropriate.

Diagnosed by who? He doesn’t say. He continues:

In various seminaries [during the ’60s] homosexual cliques were established, which acted more or less openly and significantly changed the climate in the seminaries.

Ratzinger goes on to lament the fact that accusers are given more protection and weight than the church (which has billions of dollars and centuries-old hierarchical secrecy on its side, by the way). He also compares accusers to agents of Satan seeking to discredit the entire Church.

As the New Civil Rights Movement explains, this claim is particularly a fine bit of self-serving BS, seeing as Papa Ratzi himself helped cover up the church’s international child rape ring for years:

Before becoming Pope Benedict he was Cardinal Joseph Aloisius Ratzinger, the Vatican’s man in charge of managing the growing revelations of the Catholic Church’s child sexual abuse scandal. Ratzinger has been accused of personally making decisions to not punish priests who raped young and teen boys but to ship them off to other dioceses, where they often committed their crimes on an entirely new population.

During his eight years serving as God’s agent on Earth (haha), Ratzinger used his Christmas address to call gay people a threat to world peace. Many LGBTQ organizations celebrated his unexpectedly early retirement in 2013.

the passion of ellen
12