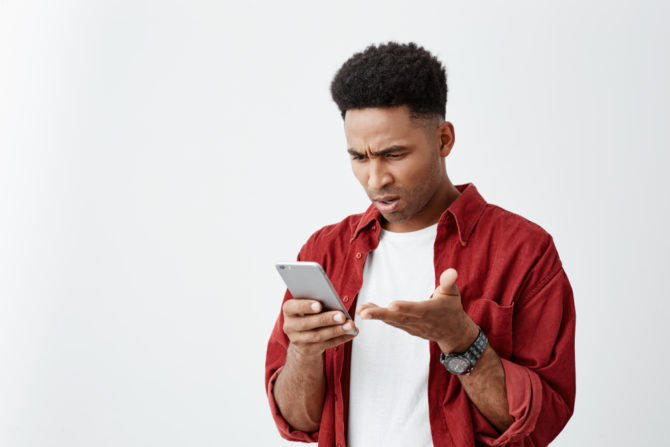 A Reddit user says he has “a very strong attraction” to his roommate, one of his best friends. The friend is exactly the Redditor’s type, they can hang out for days, they’re both gamers, they like the same TV shows, they have the same sense of humor, and they’ve been known to cuddle in bed. And this friend even says that he bases his attraction on personality and not “physical form.”

Unfortunately, the friend has an off-and-on girlfriend. “Aside from that, I am friends with his GF and would not think to interfere in their relationship, even it being as confusing as it is,” the Redditor says. “But I never really even got to the point of thinking about that since he is straight. I never let my feelings for him develop. This isn’t my first rodeo with straight/curious guys, and know to protect myself and keep it platonic. There’s no point in pining after someone who will never like you back.”

But now that this friend is on a break with his girlfriend, he appears to be looking for Grindr matches.

Related: 20 guys who confessed their love to their straight best friend

For backstory, this Redditor explains that he and his friend, both in their 30s, have been living together along with the friend’s “girlfriend” for about a year now.

“I say girlfriend with quotations because their relationship has been rocky, and they do not consider themselves in a relationship, aside from living together and having sex, which is quite confusing,” he explains. “We’re all very close and typically do everything together. [A] recent turn of events have made things very hairy.”

Even more confusing? Both the friend and the girlfriend have talked about “messing around” with this Redditor while they were drunk.

“We’ve all cuddled in bed before, and she has tried to initiate things between us on multiple occasions, but it just hasn’t happened. There have been incidents where it was clear he wanted to do something sexual with me but got uncomfortable about it and couldn’t follow through.”

But now the friend and his girlfriend have hit another rough patch in their relationship, the girlfriend has moved out, and the Redditor thinks this break might be permanent.

And then, while he and his friend were watching TV recently, the Redditor saw his friend using an app that looked just like Grindr. “I could have left it at that, but my curiosity got the better me,” he said. “I downloaded it myself and saw the closest person to me was a profile with his exact stats.”

Related: Gay man’s touching ode to his “best straight boy-friend” is going viral for all the right reasons

Now the Redditor, who’s been single for seven years because of his shyness and fear of rejection, is torn about what to do next: whether to let his friend have his Grindr secret or to talk about it. But mostly, the Redditor “wants to open the door for possibilities with him, whether its just experimentation or something more.”

“Is appropriate for me to try and talk to him about his sexual preferences based on what I’ve written?” he asks his fellow r/askgaybros users. “If so, is there a particularly good way to go about it, especially for someone who is potentially closeted? Is it wrong for me to want something to happen between us? Is this something I should let go?”

Related: Straight guy decides to ‘make a go of things’ with his bisexual friend

So far, the responses to this Redditor’s plight have run the gamut. One commenter told him to hit up his friend on Grindr and see what happens. Another recommended messaging the friend and inviting him to his room if he’s interested, and if he’s not interested, they never have to talk about it again.

A different commenter urged caution, however. “To break it to you, this honestly seems like wishful thinking on your part, and you’re putting two friendships at risk by entertaining the idea,” that user wrote.

And while one person advised letting it go — “If it [is] meant to be, it will develop when you least expect it,” that user wrote — another person told the Redditor to broach the topic.

“You would rather take temporary embarrassment than living with regrets. While you should try to not scare him off, it’s fine to ask him about Grindr and his sexuality. Friends can talk about those topics, and for the sake of reducing future regrets, you should probably shoot your shot.”

Check out the full thread for more responses and to get updates on the story: The Redditor says he’ll post a follow-up if he “work[s] up the courage to do anything about it.”