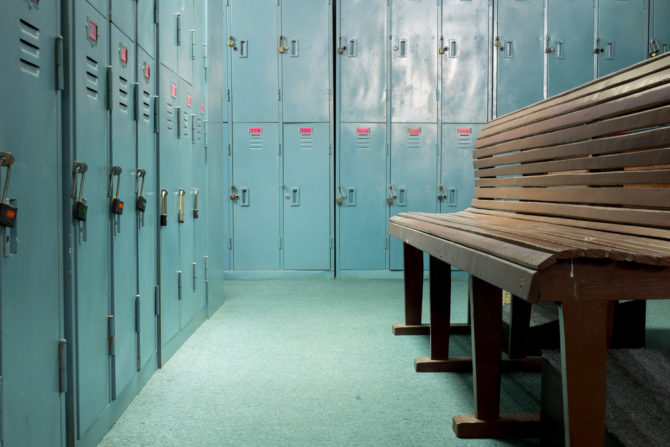 Four players from Sport Clube Gaúcho, a Brazilian soccer club based in Passo Fundo, Brazil, have had their contracts immediately terminated after a video of them engaging in a locker room sexcapade appeared online.

The 11-second video was reportedly recorded on Friday and uploaded to the Internet over the weekend. It depicts one player on his knees in front of two other players while a fourth player records, laughing hysterically.

The names of the four players have not been released. Within hours, the video, which is currently available to view on YouTube of all places, went viral.

Related: Rugby team cordially invites you into the locker room to ogle their undressed adventures

Club president Gilmar Rosso told Brazilian outlet Globo Esporte that the reason the players were let go was because the acts occurred on club property.

“Outside business hours, we have nothing to do with the situation,” he said. “If they want to get drunk, gay or not, that’s their problem. What I have to answer as president is during a trip, office hours. That’s my responsibility.”

He added, “The club is not a keeper of morals and good manners. The only thing we have to answer to is them making the video inside the locker room.”

When asked if he had watched the video, Rosso said he watched the first few seconds of it but “found it disgusting” and turned it off shortly thereafter.

Speaking to UOL Sport, Rosso added that he thought the players were straight, but now he’s not so sure.

“As far as I know, these three are not gay, but now they would have to prove that they are not gay.”

Hmmm. We can’t help but wonder how this situation may have been handled if they video featured heterosexual sex acts instead.

You can see the very NSFW video HERE or HERE. At least until someone flags it for removal.