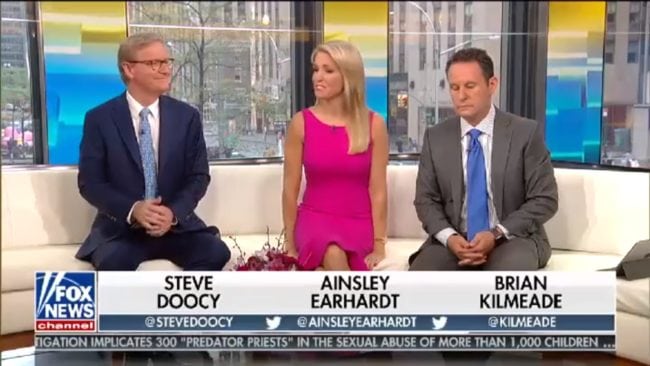 Fox News’ Ainsley Earhardt was just schooled by the Dictionary for referring to Christine Hallquist, who became the first openly transgender major party nominee for governor in the United States this week, as “that transgender.”

The gaffe happened yesterday when she and her Fox & Friends co-host Griff Jenkins were talking about Tuesday’s election results.

“In Vermont it was all about Bernie Sanders, and they nominated the first transgender candidate for Governor,” Jenkins said.

That’s when Earhardt replied: “That transgender beat a 14 year old! They didn’t have an age limit, so the 14 year old said, I’m going to run! Ran in the primary, didn’t win.”

Understandably, people weren’t too pleased about Earhardt referring to Hallquist as “that transgender.” Many accused her of dehumanizing the candidate and trying to turn her historic victory into some sort of joke.

To which Hallquist herself replied:

Thanks @ChelseaClinton – we're so excited by the letters of support we're receiving from across the country everyday! Together, we'll realign America's moral compass.

Pronouns: she, her, hers https://t.co/qupR2dCFIA

But it was a tweet from the Dictionary itself that has gotten the most attention.

In response to Earhardt’s transphobic flub, Dictionary.com wrote: “Transgender is an adjective, not a noun.”

Earhardt attempted to walk back her comments afterwards, telling The Wrap: “I was responding to the reporter’s comments when I moved too quickly and couldn’t recall Christine Hallquist’s name.”

She continued, “As a person of faith, I sincerely promise I never ever meant anything derogatory and I am sorry it may have come off that way.”

OK, we’re not sure what being “a person of faith” has to do with any of this, but whatev.