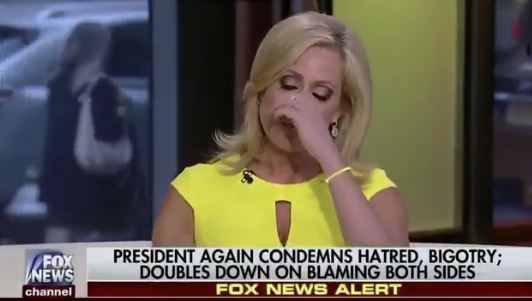 So uncomfortable, in fact, that they break down in tears on live TV because they just feel so judged!

During a Wednesday broadcast, she defended President Trump’s bombastic news conference in which he doubled down on blaming “both sides” for violence at the white supremacist rally that left one counter-protester dead and another 19 injured.

But even her Fox News co-hosts weren’t taking it, and the friction that ensued was enough to bring her to tears.

“I am so uncomfortable having this conversation,” she said.

“I know what’s in my heart and I know that I don’t think anyone is different, better or worse based on the color of their skin,” Francis continued, waterworks initiated. “But I feel like there is nothing any of us can say right now without being judged.”

Co-host Harris Faulkner threw Francis a bone, saying “there have been a lot of tears on our network, and across the country and around the world.”

“It’s a difficult place where we are, but it’s not where we’ve been, it’s where we are,” Faulkner added. “This is not 1950, we can do this. We can have this conversation, oh yes we can. And it’s OK if we cry having it.”

This is funny but I also want to talk about how what @MelissaAFrancis is saying here is, in fact, racist. https://t.co/5t1tqDArAH

It is racist to try to stop discussions about racism because they make you uncomfortable.

It is racist to put your comfort over the oppression of others. That’s the sneaky racism.

The other woman (I don’t know who it is, sorry) is trying to point out the tough facts about what Trump says. Francis won’t let her.

Stopping that discussion because you are afraid of being accused of racism perpetuates suffering.

You can’t just say “I don’t think people are different because of their color” and declare racism solved. That’s not how it works.

Most of all, we need to LISTEN to people of color. Even when it makes us uncomfortable.

You seem nice, Melissa. But you don’t get a free pass from racism because you want one. None of us do. We all have work to do.

Francis reportedly blocked Berney on Twitter shortly after his comments.