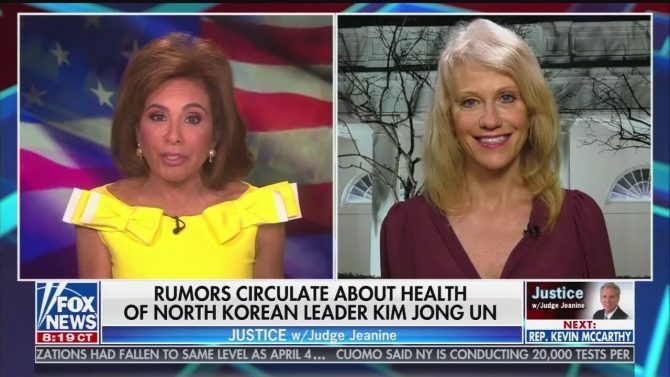 Fox News host Jeanine Pirro has been broadcasting her show Justice with Judge Jeanine from her home for the past month. As a result, she has been without her usual glam squad, and it’s definitely starting to show.

Last month, the self-proclaimed “highly respected District Attorney, Judge, author & renowned champion of the underdog” made headlines for appearing, shall we say, out of sorts on the first episode taped from her living room. Not only did she arrive 15 minutes late, but it seemed she forgot to do her hair and makeup before going on camera, and there was speculation she may have been drunk.

OMG. What is Fox News doing putting someone on the air in the condition? https://t.co/N0dPciYAaU

Then last weekend, she suffered a fashion feax pas. On Saturday night’s episode, Pirro wore a bright yellow off the shoulder dress adorned with giant bows that looked not dissimilar to something a 5-year-old girl might wear to an Easter parade.

To make matters even more awkward, the bows on Pirro’s shoulders kept slipping down, causing the dress to fall progressively lower as she spoke to guests Kellyanne Conway and Lindsay Graham.

Here’s what people have been saying about it…

@JudgeJeanine This is the result of NOT having any GAY FRIENDS, or a decent STYLIST for that matter?!!#WhatWasYourPromTheme pic.twitter.com/9y4sQFTjaL

Who wore it better? 🤔 pic.twitter.com/TIPNsyhi17

@JudgeJeanine 🍸🍹🍷🥂🍾 is wearing a margarine box that she converted to a prom dress. pic.twitter.com/HzdvzteMhG

Who wore it better? pic.twitter.com/3h7qpAAYdr

In other news, Jeanine Pirro dressed up as an Easter Basket (of deplorable) this week. pic.twitter.com/k0jvFjqkdj

Jeanine Pirro looks like the last Barbie doll left on the shelf at an Ame’s on Christmas Eve 1984. pic.twitter.com/zB3rmqt2nI

“Judge” Jeanine’s dress design tonight is a collab between Tucker Carlson and the Man With the Yellow Hat. pic.twitter.com/yldEd97yTz

Even her diehard fans weren’t having it…

Judge I love you, but please burn that yellow bow dress! It looks like a party dress for a 5 year old. Hard to take you serious….

@JudgeJeanine I love you! But never, ever let anyone talk you into yellow an bows ever again. They are not Trump supporters and want you to look bad!

This Yellow Dress was not complimentary on you

@JudgeJeanine what is with the yellow prom dress? You better get your clothes designer to do a FaceTime!

Suddenly it all makes sense why Pirro and her Fox News colleagues are so deperate to end social distancing measures.