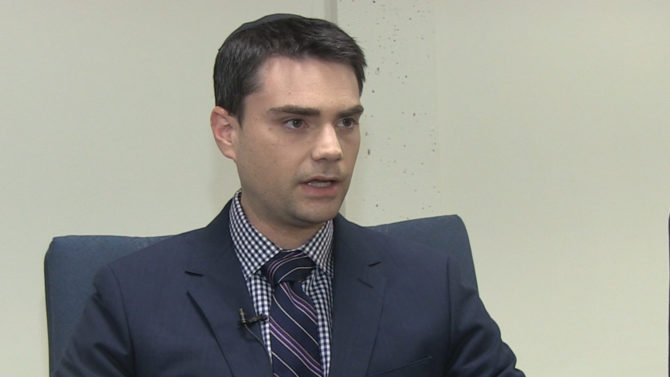 Conservative writer and former Breitbart editor Ben Shapiro has a message for the world: Just because he’s not interested in having sex with another man or a transwoman doesn’t mean he’s a bigot! So stop calling him one!

In a new think-piece titled No, You’re Not a Bigot If You Only Want to Have Sex With People to Which You Are Attracted, 33-year-old Shapiro spins quite a word salad as he tries to argue that not being sexually attracted to a person isn’t a reflection of your values.

According to the left, all sexual behavior is malleable and based largely on social structures that have been implemented by the patriarchy. Men and women don’t exist but for their self-perception — we know that a man can be a woman and a woman can be a man, regardless of biology. That’s why Caitlyn Jenner isn’t just a man with a mental disorder and some plastic surgery and hormone injections.

Oh, but it doesn’t stop there. Shapiro continues:

The left reasons that if a man can be a woman, then a man who only wants to have sex with biological women must be a bigot–his desires have been wrongly defined by a society that restricted the definition of womanhood to, you know, women. If only men had been exposed to the deeper truth of gender earlier. If only they’d known that some women have male genitalia. Then, perhaps they’d be willing to have sex with biological men who are actually women.

Spoken like a true heterosexual white male from a privileged background, Shaprio seems to be confusing sex with equality, which, of course, are two very different things.

He goes on to provide readers with a definition of just what it means to be straight, in case any of them didn’t know:

As a general rule?

All that, Shaprio says, is simply “reality.” And reality, he writes, “isn’t bigotry. People are attracted to those they are attracted to. … Attempting to pretend away reality doesn’t change that reality.”

This guy would fit in quite nicely with the racist “No Blacks or Asians” Grindr crowd, no?

The suggestion that discriminatory nastiness is at the root of the perfectly logical biological desire for people to have sex with members of the opposite biological sex is merely a slur, a crutch to cover up the illogic of the far left when it comes to gender and sex.

birds of a feather
23