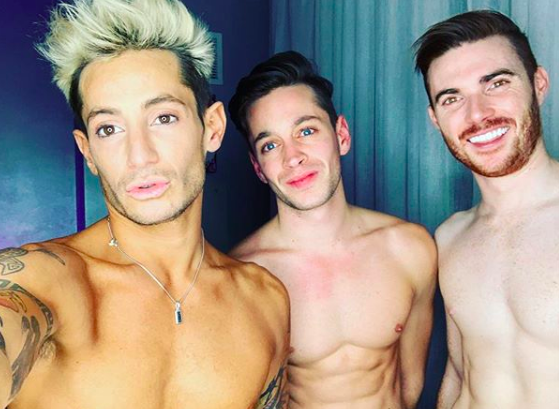 Frankie Grande, former Big Brother contestant and brother of Ariana Grande, recently revealed that his boyfriend is married… to his other boyfriend.

Grande made the throuple disclosure at the only appropriate venue: Bette Midler’s Hulaween party in New York City.

“These are my boyfriends,” he told US Weekly at the event, introducing married couple Daniel Sonasohn, attorney at law, and Mike Pophis, a doctor, before quipping: “[It’s been] almost three months, but in the gay world it’s like five years.”

Now, in an interview with New Now Next, Frankie has elaborated on the relationship, which is still going strong after more than 90 days.

And while the trio keeps busy schedules, Grande says they try very hard to make time for one another and another.

He continues: “In each way, we are a complementary group. The triangle is the strongest shape, and each one of us brings the right amount to the relationship to make it sturdy.”

Dear Mike, I know we have only known each other for a few short months but in that time I have come to see you as the smart, kind, funny, caring, strong & brave man that you are. You’re so wonderful to Daniel & I. Thank you for making me so happy and for asking me into your life… ? But really i’m just glad i’m no longer the only one in this relationship in his 30s. ? Happy Birthday Mike! ?3??0??? ? Frankie?

As for moving in together, Grande says it’s still a little too early for any of that.

“We’re still dating. It’s early stages,” he says. “I just moved into an apartment in Chelsea and I love it, and it’s good to have my own space and they have their own space.”

He adds, “I’ve been single for almost nine years now. I have not been in a relationship that’s lasted more than six weeks since then. So, approaching three months is looong.”

Related: PHOTOS: Frankie Grande is officially in a throuple and wants the world to know