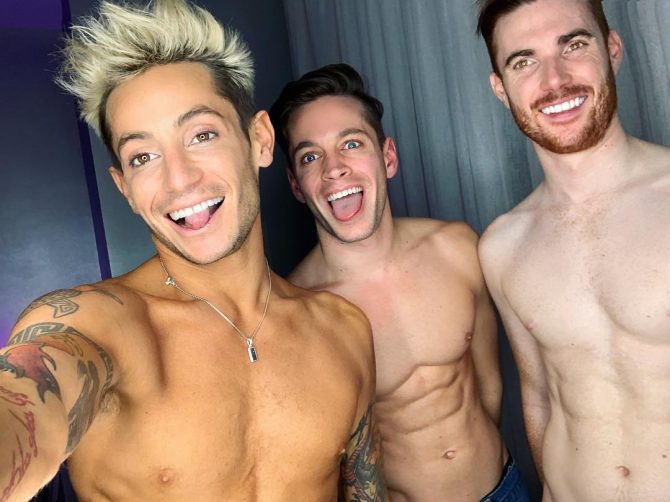 When it comes to love, Frankie Grande hasn’t been particularly lucky. But he still has hope that one day he’ll find that special someone (or someones).

Last November, Ariana’s older brother announced he was in a throuple with two other dudes, married couple Daniel Sinasohn and Mike Pophis.

“It’s the most responsible thing I’ve done in a while,” Grande said at the time. “A lot of people come up to me and say, ‘Oh my God, you’re in a throuple? I’m in a throuple.’ It’s been cool to see people do that as well.”

The love affair was short-lived, however, because by January the trio had parted ways.

“It wasn’t working out anymore,” Grande said shortly after the split, describing the relationship as “complicated.”

But that was January. Now it’s March and he’s in a way better place.

“I’m certainly dating again,” he says, “and ready to meet whoever is the right person or persons out there for me.”

He describes being single again as “interesting.”

“When [I became] publicly single, I got so many messages from boys that I had not spoken to in so long on Valentine’s Day, being like, ‘Boo, what are you doing today? How you doing?’ I was literally like, ‘Oh, my God, wait, what’s happening?’”

He adds, “I think the single people smell that I’m single.”

He’s also been living his best life on Instagram, posting pool shots and beach selfies and posing for the occasional piece of product placement. (Hey, a guy’s gotta eat!)

thank you so much @drlancerrx for keeping my skin looking like a baby’s! i’m obsessed with my new travel kit of essentials… ??????????? get yours now! ??#linkinbio

As for finding new true love, Grande thinks 2019 will be the year. In fact, he’s certain of it.

Related: Frankie Grande Joins The Growing List Of Male Celebs Showing Off Their Glory On Camera