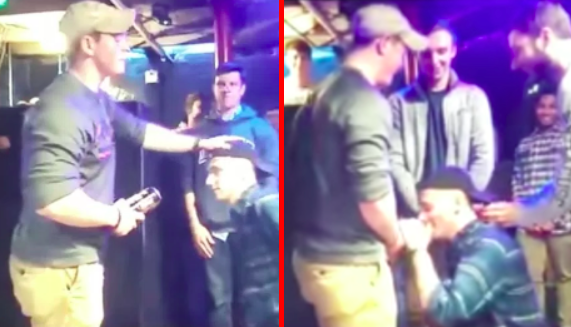 This just in: Toxic masculinity is still alive and well. Also, frat boys are the worst.

“I solemnly swear to always have hatred in my heart for n*****s, sp*cs, and most importantly, the f*cking k*kes,” one frat boy can be heard pledging in a video to thunderous applause.

If that’s not disgusting enough, another video shows the frat boys mocking the disabled: “He’s drooling out of his mouth because he’s retarded in a wheelchair!”

Shortly after the videos emerged online, Syracuse Chancellor Kent Syverud issued a statement calling the videos “deeply harmful and contrary to the values and community standards we expect of our students.”

“There is absolutely no place at Syracuse University for behavior or language that degrades any individual or group’s race, ethnicity, sexuality, gender identity, disability or religious beliefs,” he wrote.

Related: Meet the alt-right frathouse creeps ‘The Proud Boys’, and then take a long shower

Michael Abraham, executive director of the Theta Tau Central Office, expressed sympathy for the men, saying many have become scared for their lives since the videos have hit the internet.

“They have been identified on social media, and due to the university having leaked this video to the press, they are now endangered,” he tells the New York Post.

Abraham adds that Theta Tau will do everything it can to help deal with the fallout.

“Theta Tau will fulfill the role that we would have expected of the university,” he says. “We will educate them.”

Related: Frat Boy Dishes On What It’s Like To Be Gay And Greek