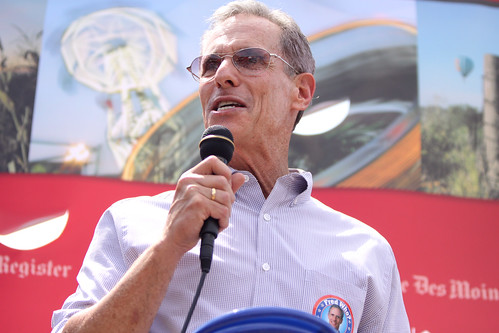 Fred Karger, the gay Republican running a vanity campaign for the party presidential nomination, has one thing in common with the religious right. When it comes to Mormonism, Karger can be every bit as bigoted as the nuttiest evangelicals. In an attempt to lower the already underground bar for civilized political discourse, Karger has launched a website called the Top 10 Craziest Mormon Beliefs because nothing says GOP presidential caliber more than ridiculing the religious beliefs of fellow Americans.

Now, let’s be clear: When it comes to institutional homophobia, the Mormon Church stands shoulder-to-shoulder with the religious right, the Catholic Church and, well, most of the Republican party. For us, they do not make sympathetic victims. How can we ever forget how Mormon dollars essentially bought Proposition 8, just to give one example? When it comes to denying us the core equality its members take for granted, the Mormon Church is second to none.

But whether Mormons believe Joseph Smith had golden plates that angels took away or that men should wear special underwear has nothing to do with the Church’s political positions. If the Mormon Church was the biggest booster of gay rights in the religious cosmos, Karger would probably be lauding them for the lovable quirkiness of their beliefs. Every religion, indeed every group of Americans, has its quirks. Instead, he’s reaching out to “educate America” by essentially calling Mormons crazy. The political beliefs of many Mormons may be reprehensible when it comes to gay rights (and women’s rights), but that doesn’t give Karger the right to target their faith. If anyone should understand what it’s like to be the victim of false and defamatory canards based on nothing more than identity, it’s Karger.

And not all Mormons are as homophobic as the church leadership. Karger need look no further than fellow GOP presidential candidate Jon Huntsman, the ex-governor of Utah, who has said that he favors civil unions. That position is of course far short of supporting full equality but not exactly a burn-them-at-the-stake philosophy either. Mormons will probably never be at the forefront of LGBT equality, but that doesn’t mean that individuals won’t come around to a more progressive attitude, especially if they are enlightened as to how bigotry against one vulnerable minority group hurts every minority group. We can foresee a future where at the very least the church no longer contributes part of its vast financial fortune to anti-gay causes.

That’s never going to happen by resorting to ridiculing Mormons. Karger has done great work uncovering the church’s financial ties to ant-gay campaigns. (He’s also done great work exposing NOM’s financing.) But by running a campaign trying to promote a principle, Karger had the chance to prove that he could be the one statesman (and a gay one at that) in the clown car of the Republican presidential race.

Instead, he’s showed that he can be just as nutty (and downright bigoted) as the rest of them.