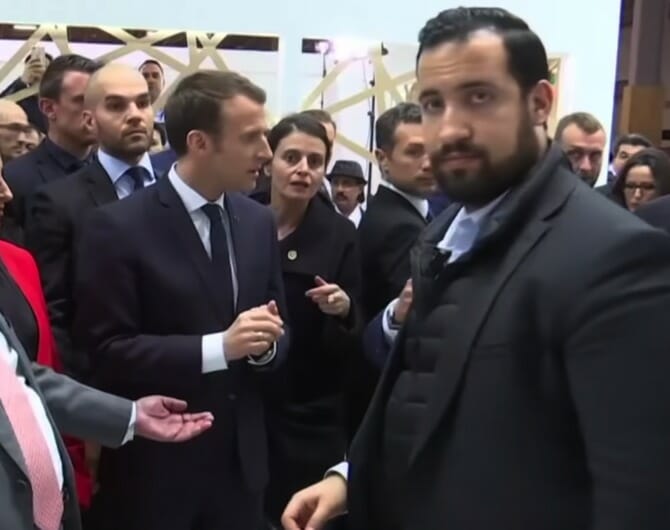 Macron is once again denying reports that he engaged in a passionate gay love affair with his former head of security, Alexandre Banalla.

Benalla was fired as Macron’s chief security officer last week, after he video of him violently beating a group of protesters earlier this year leaked online.

After being canned, Macron’s colleagues became concerned about: 1. Whether Benalla knew the country’s nuclear codes, and 2. If Benalla and the French leader were gay lovers.

Macron went on to say he was deeply disappointed by Banalla’s behavior in the video and supported his firing.

“What happened on May 1 is terrible, serious and, for me, it was a disappointment and a betrayal,” the 40-year-old leader said.

But as Gay Star News notes, this isn’t the first time Macron has denied gay rumors:

Earlier this year the French leader had to quash persistent rumours of a gay lover affair with handsome radio boss Mathieu Gallet. At the time, Gallet was CEO broadcaster, Radio France.

There were rumors that a paparazzi photographer had managed to take some salacious pictures of Macron with Gallet in a forest.

Macron allegedly had Gallet sacked from Radio France earlier this year, following the media boss’s conviction of corruption. However, some reports suggest this was a cover to dispel talk of a gay affair between the two.

Macron married his wife, Brigitte, back in 2007. The couple are 24 years apart and met when he was a teenager and she was his teacher.

Related: The photos from Emmanuel Macron and Justin Trudeau’s meeting look like a magical gay fairytale