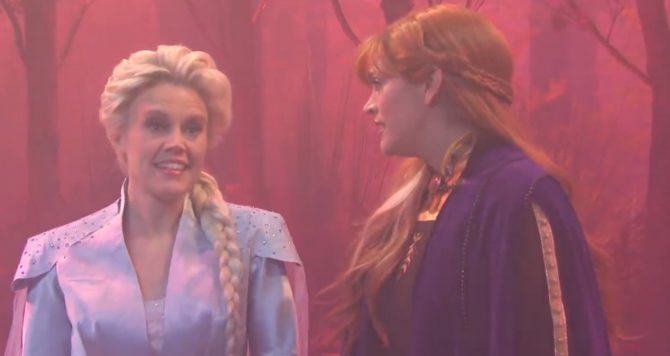 This week’s episode of Saturday Night Live needled the studio by including a sketch of Elsa, the famed queen from the Frozen films, coming out as a lesbian–something that fans of the film, as well as its stars, have lobbied for.

Elsa, as voiced by actress Idina Menzel, rocketed to full-blown gay iconhood by belting out the song “Let It Go” in the original 2013 film. Fans had hoped that last year’s Frozen 2 would see Elsa get a special lady in her life. Alas, Disney had other plans. That didn’t stop SNL from featuring a sketch made up of “deleted scenes” from Frozen 2, which finally featured Elsa acknowledging her sexuality.

Related: Father and son go viral dancing to ‘Frozen’: “This is what healthy masculinity looks like”

Kate McKinnon dons a blond wig and silver dress for the sketch, which features Elsa uttering “Ana? Krystof? Olaf? I’m gay?” as her opening lines. Cecily Strong then appears as Elsa’s sister Ana, complaining about an enchanted forest. Elsa whispers “I’m gay” again before the two join in a reprise of “Let It Go” which reveals that the family has long known that Elsa is a lesbian.

An announcer then chimes in, asking “If Elsa’s gay, she can turn my son gay, right?” The jibe, no doubt, refers to Disney’s real-life anxiety over parental backlash should their films actually include an overt queer character.

With Frozen 3 apparently in the works, we hope the House of Mouse will take note and actually let Elsa have a girlfriend in the forthcoming sequel. Dude, let it go!