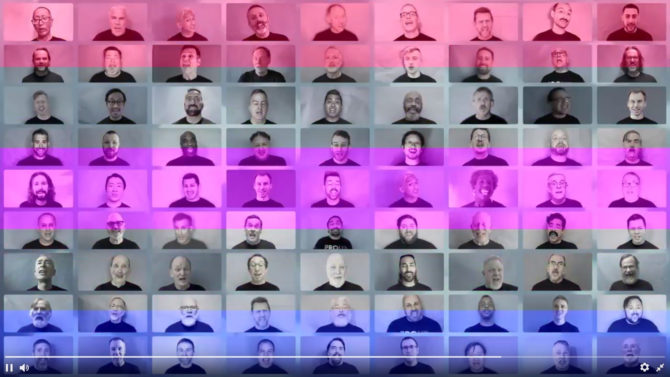 The San Francisco Gay Men’s Chorus has become the target of right-wing trolls following the release of a new comedy video.

The song, titled “A Message From the Gay Community,” debuted on YouTube earlier this month. The song, a satirical tune making fun of the longtime right-wing charge that gay people would recruit children, makes note of gains in visibility and acceptance by LGBTQ people in recent years.

“There’s really no escaping it/’cause even grandma likes Rupaul/And the world’s getting kinder/Gen Z’s gayer than Grindr,” sing the men in the video.

The premise of the song–and a few out-of-context lyrics–have attracted the fury of the Republican troll machine. Right-wing conspiracy site InfoWars attacked the chorus in an article, accusing it of promoting pedophilia. Members of the chorus have also received death threats as a result.

“We have received emails, phone messages, threats across all of our social media platforms — not just the chorus, but the staff, as well as the soloists who were featured in the song,” Chris Verdugo, executive director of the Gay Men’s Chorus, told the website SFist. “The [Youtube] comment that continues to stick out in my head is the one that said ‘We’re going to put lead in your head.'”

“Someone on Twitter took a screenshot of the singing members of the chorus and created a spreadsheet and was starting to identify them,” he elaborated. “Some of our members’ jobs were contacted saying, ‘Do you know you have a pedophile working for you?’ or things of that nature. Singers on their social media have been getting threats.”

The tongue-in-cheek nature of the lyrics is apparently (and perhaps, willingly) lost on right-wingers already disgusted by the existence of LGBTQ people. SFist further reports that a Twitter user has also claimed to have identified men in the video as registered sex offenders. An investigation, however, revealed that the men the user claims to have identified only have similar names and do not match photographs listed in the Megan’s Law database.

Meanwhile, the Gay Men’s Chorus has made the original YouTube video private in an attempt to protect the participants. The group has also reported the harassment to the FBI and San Francisco police.

The attack on the Gay Men’s Chorus of San Francisco comes at a somewhat ironic time given current sex scandals plaguing Republican lawmakers and donors. At the moment, Congressman Matt Gaetz is under investigation for sex trafficking of minors. Republican donor Jerry Falwell, Jr. spent most of last year deflecting from allegations of sexual exploitation of students at the college where he served as President, Liberty University.  Just this week, GOP Congressman Madison Cawthorn also became the subject of renewed sexual harassment charges by a group of women.